Eric also runs a US-based company called Coal Hill Books which provides rights agency and publishing consulting for Chinese and international publishers seeking to do business with each other. You can reach him there at eric@coalhillbooks.com.

It's time once again for the Mao Dun literary prize, so dear to the official heart of the Chinese literary scene. Never mind that everyone whose opinion we respect snorts in disdain at the very mention of this prize (which is administered by the Writers Association) it's still a literary event.

To get the suspense out of the way, there were four winners of this year's prize, which considered full-length works of fiction published between 2002 and 2006: Jia Pingwa's Qinqiang (秦腔, Qin Opera), generally considered the 'big winner', Chi Zijian's E'erguna He You'an (额尔古纳河右岸, The Right Bank of the Arguna River), Zhou Daxin's Huguang Shanse (湖光山色, Pastorale) and Mai Jia's Ansuan (暗算, Plotting).

The official announcement of the prize is awfully Marxist (for once the low-hanging fruit can stay right where it is), but there have been other, more thoughtful responses on-line.

After what has felt like a long, long month of translating crap, I snuck over to a non-work-related short story this evening and chewed on the first paragraph. It's called 玻璃酿 — which might conceivably mean 'Glass Fermentation', or could have a particular meaning I'm unaware of — and it's something Zhao Song at the Heilan website recommended to me; you can read the original here.

The first sentence is pretty standard short-story-ese, but it presents greater challenges to translation than simply locating a dictionary with the word "open-cut coal seam" in it, and that alone is cause for celebration:

Roughly: the light of three in the afternoon lengthens or draws out the shadows of the pine needles. There's a nice balance and rhythm to the sentence: split in half, with the second half turning on the verb 延长 (lengthen). There's a parallelism between 光线 (light) and 阴影 (shadow), each set at the end of their respective possessive phrases. The sentence as a whole has a nice clumping rhythm which I can only describe as trochaic sextameter (I looked that up): 'DUM-dum DUM-dum da-DUM-dum, DUM-dum da-DUM-dum da-DUM-dum'. Here are some candidates:

The following is a translation of this Chinese article, which appeared a few weeks ago, about Yan Lianke's newest novel Fengyasong (Elegy and Academe), a satire of academia and university life in China. The book drew heavy fire from some quarters, particularly professors at the universities to which the book alludes. The fictional 'Qingyan University' within the book is an amalgamation of China's two top universities: Qinghua and Peking Univeristy (the latter was once called Yanjing University).

The book that offended Peking University

"I think the critics at Peking University are being too sensitive." Yan Lianke's eyes are bloodshot, his face sallow, he looks exhausted.

The Newman Prize for Chinese Literature is a new prize for Chinese writing sponsored by the University of Oklahoma's Institute for US-China Issues. Mo Yan has won the inaugural round, which you can read about here. From the home page:

The Newman Prize for Chinese Literature is awarded biennially in recognition of outstanding achievement in prose or poetry that best captures the human condition, and is conferred solely on the basis of literary merit. Any living author writing in Chinese (residing anywhere) is eligible. The Prize consists of $10,000 and a plaque, and may serve to crown a lifetime’s achievement or to direct attention to a developing body of work. An international jury of distinguished experts will both nominate the candidates and select the winner, based on a transparent voting process.

The Xinhua News Agency, as it is wont to do, brings us fresh cause to despair: the hot new literay trend is here, and it is 'writing groups' or 'bands' (写作组合), cabals of scribblers analogous to the boy-bands or girl-bands that dominate the pop music world. These writing groups are mostly in the under-twenty age-range, mostly writing in imitation of 'older' celebrity writers like Han Han. Apparently it all started in 2006, when Li Ze (李锋) at the World Knowledge Press (世界知识出版社) published Water Town (水城), a novel by a pair of girls then aged 18 and 19, who called themselves Jumping Orange Writing. They were followed by the three members of Girls' Studio (女生作坊) (the youngest of whom is 16), Lollipop (棒棒糖) (middle school students), and Unknown Quantity (未知数) (elementary school students). As the article cheerfully notes, many of these groups only ever publish one book, or break up without having published anything at all.

Is this curtains for serious Chinese literature? I've done plenty of hand-wringing myself in the past few years, but at a certain point, when pop culture has got its claws deep enough into literature, it seems likely that literature will pull a Trojan Horse, and start to transform pop culture from the inside out. Among all these scribbling teens there must be a few who, fifteen years from now, at the age of 29 or 30, will start to feel the itch of dissatisfaction and wonder if they shouldn't be trying for something a little deeper. From the melodramatic, sentimental mush that's being produced today, it's only a few short steps to a Chinese Dickens, and once you've got a Chinese Dickens, well… there's nowhere you can't go.

Wishful thinking, perhaps, but if these trends keep up I'm going to renounce all snooty puritanism, and whole-heartedly embrace this new era of sloppy literary love. Not actually read the books, mind you, just 'embrace the era'.

China will be the guest of honor at the 2009 Frankfurt Book Fair next year, and preparations are already underway. The following conversation serves as a foreword to the informational packet being produced by the German Book Information Centre here in Beijing, which also includes a sampling of Chinese writers and works that will be featured at the Frankfurt Book Fair.

The following article ran in Southern Weekend in late August, examining The New York Times Book Review's edition dedicated to reviews of Chinese literature. In the interest of multicultural understanding, we hereby present this translation of an analysis of a review of a translation of some novels.

Does everyone remember the domestic media reports in early May, saying that The New York Times Book Review had praised Guo Jingming as China's 'most successful' writer? Plenty of people had their feelings hurt and, hopping mad, cursed the American devils for wearing colored glasses and slandering Chinese literature.

In the run-up to the Olympics, PEN is holding an event centered around China's imprisoned or threatened writers and journalists. This will take place in New York on August 7, at The New School's Tishman Auditorium. From the press release:

On August 7, the eve of the 2008 Beijing Olympics, PEN American Center will honor the more than 40 writers and journalists currently being held in Chinese prisons for exercising their right to freedom of expression. Acclaimed American writers will come together on stage at this special event to break the silence—or what has been called the Great Firewall—that threatens the work and lives of Chinese writers.

On the off chance that anyone's there and attending, send a report or a photo, will you?

My our window on the world is awfully small… It sounds as though there's a fascinating discussion on translation in the latest issue of Calque, a journal of literature in translation, but we wouldn't know if it weren't for Three Percent, who have posted a bit of it:

"To tell the truth, I suspect that readers who can compare translations and originals actually tend to be worse judges of the quality of a translation than people who are unable to read the original. [. . .]

"Of course, readers who can access both the original and the translation are able to find obvious mistakes, and that’s something only they can do, and that can be important. But surely that’s not what we mean when we ask what distinguishes good translations from bad? We’re interested in something that runs deeper, I would hope—not something so superficial that any old multilingual reader can come along and point it out after a hasty comparison of the two texts. [. . .]"

The Guardian continues its foray into Chinese letters with a brief reading and audio interview with Zhu Wen:

"I am a quite ordinary person. Ordinary means, I think, [someone who] can't express what he feels. In China it's rare that people could do that, they keep silent. Speaking out, and facing the reality of China, is a writer's job. You must do it.

"Jin, who teaches English at Boston University, said Saturday he's interested in visiting China but is discouraged by the difficulty of publishing Chinese translations of his English books in the mainland. He said he also applied to become a visiting professor at the elite Peking University in Beijing in 2004 but never heard back."

"Instead, the writer's focus is his new life in France, a country he had visited several times as an interpreter before his exile. He now has French citizenship and said he had no trouble integrating into French society, something he attributes to having grown up with Western culture."

"Also welcome, in my view, is Jiang Rong’s willingness to merge his tale of environmental destruction with an open discussion of Han Chinese cultural and political imperialism."

Has it been a year already? The long list for the 2008 Man Asia Literary Prize has been announced; only three of the twenty titles are Chinese. In our corner:

The qualification rules for the competition state that the books need to be submitted in English manuscript, but the English version must not have been published yet. Banished! and Brothers have publication dates, but I hadn't heard that anyone was translating Leave Me Alone, Chengdu. Murong Xuecun's appearance on the list is interesting – he was one of the early internet authors, writing vaguely adolescent stories of youth and urban anomie, but he's taken on a steadily more 'serious' tone. I haven't read Chengdu, but I head it's pretty good. Anyway, if anyone knows who translated either Brothers or Chengdu, leave a comment! The shortlist arrives September 1st, the final winner to be announced at the end of September.

From the past fifty years. So says The Times, at any rate. One Chinese book, Gao Xingjian’s Soul Mountain, and that almost certainly because Gao is a Nobel laureate. On the other hand, if I had to vote for a best Chinese-English translation from the past fifty years, I’d be hard-pressed to come up with a definitive champion…

Update: Esther Allen, Executive Director of the Center for Literary Translation at Columbia University, posted this up on the Guardian about the list of 50, in which, alongside ruminations on the books that made the list, she mentions that the recommended translation rate posted on the British Translators' Association webpage is 80 pounds per thousand words of prose! Golly.

If I'd ever considered hurling my wooden clogs into the guts of Babelfish's machinery (in a Luddite attempt to preserve my livelihood as a manual laborer of the mind) this should bring some comfort. 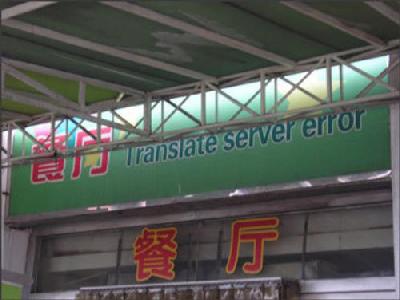