This morning was the press conference for the Dangdai literary magazine's fifth annual best novel award. Dangdai, which is run by the People's Literature Publishing House, is trying to turn this prize into a bit of a challenge to the hegemony of the bigger prizes administered by the Writers Association: the editor of Dangdai, Yang Xinlan, specifically touted this prize as the non-governmental answer to the Mao Dun prize. 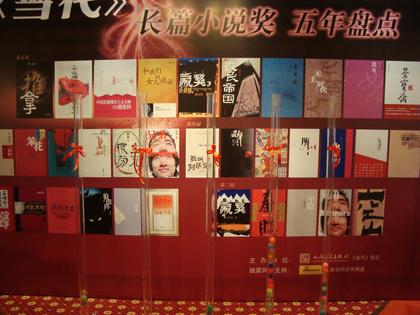 Every literary prize and its brother is touting "transparency" and "fairness" these days, but the Dangdai prize might get a little closer to that goal than most: there is no cash for the winner, reducing some of the incentive for backdoor dealing, and to hear Yang talk, the judges were left unmolested during the nomination process. She even described them as being slightly taken aback when the magazine had no "directives" or even gentle hints as to which direction they should cast their votes — if this is true, it speaks as well for the Dangdai prize as it does poorly for the other prizes.

There were two parts to today's event, which was attended mostly by publishers and literary magazine type folks: 2008's best novel award, and also a sort of grand prize given to one of the winners from the past five years. The panel of judges was as follows:

And the 2008 winners (the readers pick came mostly from voting on Sina.com):

The results of the five-year grand prize (voted on, oddly enough, by those who happened to be present in the room at the time — I very nearly voted myself) were a resounding win for Wang Gang's Yinggelishi (英格力士), the English translation of which is coming out in spring of 2009.

Update: I don't know how I messed that up: it was actually Yan Geling's Xiao yi duo he (小姨多鹤) that won in an elimination-round upset, as is clearly indicated by the ping-pong balls in the tubes in the photo above. Thanks to zhwj, who was also present and apparently awake, for the correction.

Update 2: That night I ended up at dinner with someone from the Writers Press (作家出版社) and listened to a long litany of complaint about this prize: the magazine belongs to the People's Literature Publishing House, and apparently they stacked the voting deck by inviting a small army of their own editors, but only one or two from other publishing houses (for instance, the Writers Press). She was highly dismissive of the prize, and regardless of how much of that was sour grapes, it still cast a shadow on the whole thing…

An unrelated but amusing anecdote from the same editor: she had just returned from a meeting in Guangdong arranged by the provincial-level Writers Association. Apparently the Writers Association in Guangdong has an impressive budget which they'd failed to expend before year's end, and so they invited writers and editors from all over the country to visit Guangdong for a couple of days, eat expensive food, and "have a meeting". Attendance came with a 10,000 rmb thank-you prize. "It was very boring", she said.

The PLP may have stacked the deck, but Writers Press won the voting - they're the publisher of Yan Geling's book, which beat out PLP's English. Perhaps they bought off the jury, which awarded the grand prize to PLP's Tuina...

Link to their site is dead. I'm trying to find a link to the PLPs translations of English fiction in conjunction with the British Council. Making no headway, any constructive suggestions most appreciated

Is the list of contenders for 2010 award listed above or anywhere else?

Jason, the below seems to be what you're talking about, from this link.

Thanks for the head's up on the PLP's dead website link, unfortunately that does seem to be their only website. I guess everyone's gone home over the holidays.

Thank you, Eric, that link is the best description of the program that I've seen.

So, I found the collection, 'Secret life of Dad', and they included one of my stories. I can now have my friends in Taiwan check it out.

Glad to help. I just realized it would have been politer to translate the pertinent info, but that doesn't seem to have posed a problem!