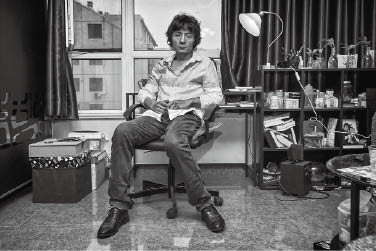 Born in 1976, A Yi (real name Ai Guozhu) worked as a police officer, secretary and editor before settling down at the age of 32 to the fiction he always knew he would write. Hardly a celebrated figure in China's literary circles, A Yi's stubborn dedication to his art and slightly standoffish personality have meant his slowly growing prominence has depended on the support of non-mainstream media and literary figures who have spotted his talent. After a brief stint on the editorial board of Chutzpah, a new literary magazine featuring work by younger and edgier writers (like A Yi himself), he moved to the Xiron publishing company, where he is an editor of the the "Iron Gourd" literary-fiction imprint.

While he has been posting short stories and commentary on his blog since the beginning of 2004, A Yi did not appear in print until his first collection of short stories, Grey Stories, was published in 2008. This was followed in 2010 by The Bird Saw Me, another short story collection that developed A Yi's bizarre literary style and utterly unsentimental worldview. A book of observations, blog posts, and sketches, Guaren, was published in 2011, and his first longer piece, the novella Now, What Shall I Do Next?, came out in China in 2012. Though highly popular with a select group of readers and writers (Li Jingze, former head editor of People's Literature Magazine regularly praises him publicly), A Yi's reputation has not yet spread to a wider reading public (and, given the darkness of his subject matter, it might not).

A Yi's first book to appear in English is A Perfect Crime (translated from Now, What Shall I Do Next?), published by Oneworld, June, 2015 (UK). Translated by Anna Holmwood.

An English translation of his story "The Curse" can be read here.

A Yi is represented by Peony Literary Agency.