Han Dong began writing in 1980, and has been a major player on the modern Chinese literary scene since the 1990s. He is well-known as one of China’s most important avant-garde poets, and is also an established essayist, short story writer and novelist.

Born 17 May, 1961 in Nanjing. Han Dong’s parents were banished to the countryside during the Cultural Revolution, taking him with them. When the Cultural Revolution ended, he studied philosophy at Shandong University, graduating in 1982. He subsequently taught in Xi’an and Nanjing, finally relinquishing teaching in 1993 and going free-lance as a writer.

In October 2017, his first film "One Night on the Wharf", adapted from his novella 《在码头》／On The Pier, had its debut at the Busan International Film Festival. Han directed, the producer was Jia Zhangke. Variety review is here and there are more pictures of the screening on Weixin/WeChat.

A Han Dong novella, A Tabby Cat's Tale, was published by Frisch and Co in 2016, and the translator's Translation Notes are at Necessary Fiction

December 2012 Ann Morgan, of A Year of Reading the World chooses Banished! as her China choice. Her review is here

Excerpt from his novella 《古杰明传》Gu Jieming - A Life appears on And Other Stories website and on Paper Republic.

Short story The Wig translated for Harvill Secker Young Translator's Prize, 2012, by the winner, Phil Hand, and published in Granta magazine, October 2012. The story can be read here, and Phil's interview of Han Dong here.

《扎根》 Banished!, 2003. His first novel, Banished! won a prestigious independent prize in China and a PEN Translation Award, and was long-listed for the Man Asian Literary Prize 2008. Translated by Nicky Harman, University of Hawai’i Press, 2008.

《知青变形记》Metamorphosis of an Educated Youth, 2010. Sample translation (not entire work) appears - accompanied by an introductory essay - under the title Screwed in Asian Cha literary magazine and also here, on Paper Republic.

Voices in his head, interview for China Daily, April 2012, here

Han Dong's selected poems have been published in A Phone Call from Dalian by Zephyr Press, 2012. Multiple reviews include World Literature Today and Peony Moon

Guardian Poem of the Week, April 2012, can be downloaded here.

Some poems available as a podcast on Steve Wasserman's website here.

Other work in Chinese: Poetry collection * Dad’s Looking Down On Me From The Sky 《爸爸在天上看我》 * Essay collection * Dynamics Of Love 《爱情力学》 * Short story collections * Our Bodies 《我们的身体》 * My Plato 《我的柏拉图》 * Bright Scars 《明亮的疤痕》 * In The Western Sky 《西天上》 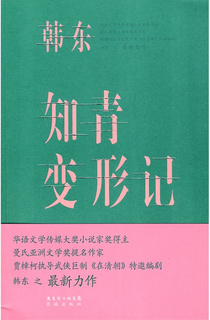