Chen Xiwo: It seems obvious that some of the old people on the prize committee are doing their bit to try and keep up with the times, so that they don't come across as completely senile and decrepit. Which includes being mischievous.
陈希我: 明显感觉到，这些年诺贝尔文学奖几个评委老人努力在与时俱进，显得不老态龙钟，包括调皮。

Di An: Murakami will be glad for Dylan.
笛安: 村上会为迪伦感到高兴的。

Han Dong: It’s good to see a talented amateur receiving the award, it’s a release, it’s liberating. Too much angst has gotten attached to the award over the years – national, ethnic, political, personal…
韩东: 一个业余的天才获奖挺好，是一次消解，一个解放。对此奖而言经年累月汇聚了太多的心理阴暗，国家的、民族的、政治的、个人的。。

Li Jingze: Yes, this is literature, and yes, this is poetry. What did you think literature was supposed to be? I edited some Chinese rock lyrics for a special magazine issue many years ago, and I knew at the time that I was in the presence of poetry.
李敬泽: 是的，这就是文学，这就是诗。你以为文学是什么？几年前编杂志时编过一期中国的歌词摇滚，那时感到，诗在此。

Liao Weitang: In 2005 I saw a book about Alzheimer’s that had somehow gotten hold of old Bob Dylan’s face to put on the cover. I cried for Dylan.
廖伟棠: 2005年我在北京一家書店看到過這本關於老年癡呆症的書，封面竟然是不知從哪裡盜來的老Bob Dylan頭像。。。我當時就替Dylan哭了。 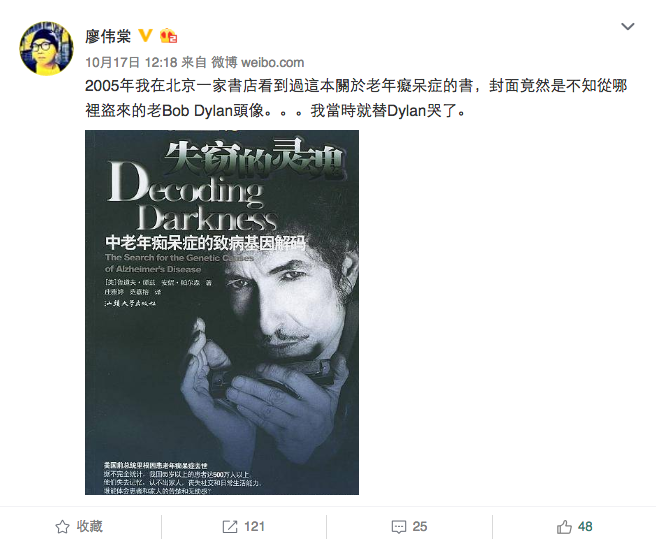 Miao Wei: Two of the three people who had the greatest influence on him were poets: Rimbaud and Verlaine. And he took the name “Dylan” from the Welsh poet Dylan Thomas.
苗炜: 对他影响最深的三位前辈中，有两位是诗人，兰波和魏尔伦。鲍勃·迪伦这个艺名，也来自于威尔士诗人迪伦·托马斯。

Yu Yishuang (a week before the announcement): Bet on Bob Dylan for the Nobel Prize every year, okay?
于一爽: nobel prize每年都赌bob dylan好吗

Zhao Zhiming: Fucking awesome. So many people are going to be sitting on their toilets, crying.
赵志明: 牛掰得不得了，好多人都坐马桶上哭了。

Zhu Yue: Personally I think it should have gone to Murakami.
朱岳: 我本人支持春上村树

(Because there are only 65 sleeps left till Christmas in which to have nightmares of Bob in a wig.)

Great use of the Paper Republic 人民广场!

鲍勃·迪伦的小说《毒蜘蛛》 I didn't know he wrote a novella ? Good for him. but how good is it?

I like the calligraphy by 秋麦, by the look of it...
http://www.qiumai.net/shufa/dylan/dylan.html

I am wading thru commentary: http://www.qiumai.net/commentary/commentary.html