I went to attend the press conference for Han Dong’s new book, 小城好汉之英特迈往 (xiǎochénghǎohàn zhī yīngtèmàiwǎng, The Legendary Exploits of a Small Town Bravo) at the Sanlian Bookstore last Saturday. I haven’t been to many book release events outside of China and don’t have much to judge by, but I think the local model is strange – the publisher ropes together big-name writer friends of the author, and gets them to speak in praise of the book in question. It’s neither a plain press release, nor a meaty discussion of the book, and the event is typically precisely as interesting as the personalities of the writers attending. The only thing that kept me awake during the launch of Li Rui’s 人间, for example, was Yan Lianke and his sense of humor. 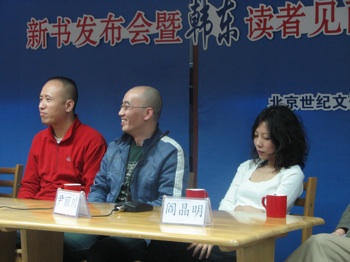 This event was similar – Han Dong’s posse included Mou Sen (牟森, an avant-garde theater director), Zhu Wen, Yin Lichuan, and Yan Jingming (阎晶明, a literary critic). For all the ambiguity of the event itself, it was an entertaining crowd. First of all, Han Dong was at a total loss as to what to say. The man has been writing poetry and fiction for twenty years, and this was his first public appearance in support of one of his books – that ought to provide some idea of the literary marketplace here. But Zhu Wen was funny, both Mou Sen and Yan Yingming had thoughtful reactions to the book, and if Yin Lichuan had little to say she at least appeared sincere. 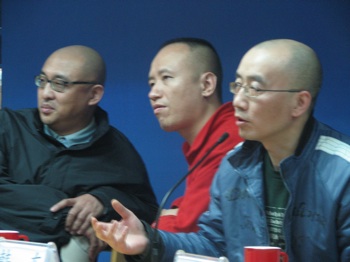 Han Dong really came alive during the Q&A – while there weren’t any really penetrating questions asked he was engaged and clearly trying to play his part. At one point the host from the publishing house asked everyone on the panel to talk about how, in a society largely uninterested in ‘serious’ writers such as themselves, they kept up their standards, and their drive to continue writing. Now, this particular group of writers survives by disavowing any interest in what the public thinks of their writing – asking them this question is like asking Ted Koppel where he bought his hairpiece. All they can say is that it doesn’t matter to them in the slightest; they write only for themselves. “I don’t like anything that’s done deliberately (我不喜欢任何故意的东西),” he said, adding that it wasn’t a matter of him maintaining his drive to write; writing was his fate, something he could only passively accept. Yin Lichuan flat out refused to answer the question. You can hardly blame them – if they were to dwell on how little regard is paid to their writing they would have given up years ago, as so many others have. Even the most earnest of writers (as I suspect Han Dong of being, in private) can only say “I have no interest in influencing anyone, it doesn’t matter who reads my writing.”

But on the other hand, he’s coming around to the necessity of meeting the people who are reading him. “I used to think public appearances were a pain,” he said, “but I guess now a writer has to work to sell himself as well.” Or, as Zhu Wen put it, we’ve got the eggs – now it’s time to see what kind of chicken laid them.

The short mainstream media report had a clever quote from Zhu Wen: "韩东是干邑，决不勾兑，那种喝红酒还要兑雪碧的人大概是不会注意韩东的，他的作品浓烈的口味让他只能是一个拥有少数读者的作者。"

I leafed through the version that ran in last December's Dangdai - it seemed like a very loosely-structured novel, or basically a series of anecdotes and character sketches, that followed a few main characters and a rotating cast of oddballs. The writing was pleasant enough, but there was really nothing to pull me through (though I'm not sure if that's just the magazine version, which cuts out chapters 1-3 and 19-21), and some of the situations, like the extended fart/kancho joke in chapter 5, seemed kind of pointlessly silly.

Guess I'll go pour myself a glass of Dynasty cut with Sprite...

Hey there's no shame in that (I mean not liking Han Dong, not the Dynasty and Sprite, that's disgraceful). I've given up, yawning, on several Han Dong stories and even the best are not thrilling. You do have to be willing to stick with them on faith, but they can be quite rewarding.

I'm only on chapter two of this new one, though, too early to tell...