On Thursday 23 April we organised East meets West: Authors Talking to Authors - the most ambitious of our events in London. For the film of the event, click here. We brought together four authors, three based in the UK and one Chinese author – Han Dong, and to talk about writing, in a bookshop in Central London (Oxfam Bookshop, 91 Marylebone High Street, for you Londoners). It was to be a cross-cultural sort of discussion and we were aiming at a general audience, the sort of person who loves books but hasn't any specialist knowledge of 'world literature'. 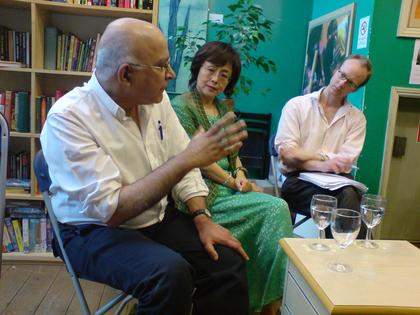 So this was scary stuff because it didn’t really fit into any of the usual categories of London literary or translation events. Would anyone come? I was confident that our speakers – an articulate lot – would produce some interesting opinions, but everything Han Dong said or heard would have to be interpreted. Would that stymie the discussion?

We had a really good panel:

To hold things together and guide the discussion, we had Richard Lea from the Guardian newspaper, who has a strong interest in contemporary Chinese literature.

Last but not least, we had a brilliant interpreter, Joy Ma.

The discussion got pretty lively: What does it mean to be a writer from East or West? How do writers find a personal creative space within the societies in which they live? How does the linguistic tradition which they have inherited, influence their writing? How do they choose a form – poem, novel, short story, non-fiction? How much, or little, do they consider the market and their readership?

Yes, people did come – not in their hundreds, but enough to fill the room, which was very gratifying. All in all, it was a really special occasion, at least in part because we had such articulate speakers (including the audience). The format worked. We need more of it - it will make a difference.

I hope you will upload the video within this week! I'm doing a creative writing module as part of my undergraduate course and this is one of the topics I'm writing my final paper on. If only I had found out about this event earlier...!