So here we are in London. After a couple of days of recovery (and sightseeing!) our first event involving Han Dong took place yesterday, at the Young Vic. The event was a part of the two day Free the Word program put on by International PEN, and featured seven or eight poets and writers from around the world reading for five to ten minutes each. There were homages to Harold Pinter and Adrian Mitchell, tales of detention, homelessness, and the unfriendly welcome that awaits immigrants at the British Home Office. 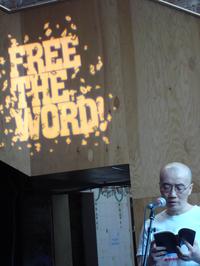 Of all the authors (who came from Cameroon, Iraq, Nigeria, Ethiopia, and Mexico, among other places), only Han Dong had interpretation. The rest weren't all up to BBC broadcast standards, but they spoke English. I found this interesting – I'm not sure whether it says more about China, about the rest of the world, or about the PEN event. Chinese writers who speak fluent English are rare (nonexistant?). Most of the other foreign writers had written about their experiences as immigrants to the UK.

Chinese writers get dissident status just by virtue of being both Chinese, and writers. Every one of the readers that day read something against the establishment – tales of police brutality, protest, living down and out – except Han Dong. He read about the dusk, and visiting a prostitute, and the sound of glasses clinking. Whatever may be anti-establishment about Han Dong (and I believe there's plenty) is not immediately obvious in his poetry, at least not the way it was obvious in the other readings. And yet he was happily welcomed into the company, a brother in suffering. I wonder if they were confused by what they got.

I don't think he quite identified, at any rate. I just now asked him, "Han Dong, do you think you're an oppressed writer?"

"Who?" he asked. (He was absorbed in a copy of We All Sing Revolutionary Songs [革命歌曲大家唱], which he'd found, against all odds, in the home of our London host. He'd also had two Guinesses.)

"Me? Who would oppress me?" He had been put in a particularly good mood by My Home is on the Songhua River (我的家在东北松花江上) and didn't seem to recall his burdens.

Its the new orientalism! It seems that Chinese artists, playwrights, writers who present work in the UK are often sold on the romance of the dissident, regardless of what their work is about.

Sometimes I feel like government control is one of the formal restrictions of Chinese poetry, like line length or rhyme. Nobody asks a sonnet writer if they feel oppressed by the envelope stanza or iambic pentameter -- it's something you signed up for when you decided to write a sonnet, a way you agreed to think. The push and pull against what is acceptable and what is forbidden ends up inscribed in the heart of the poem like the struggle between sound and sense, self and other, etc. Maybe this is one of the ways that poetry deals with trauma -- the tough flesh that forms in and around the wound.