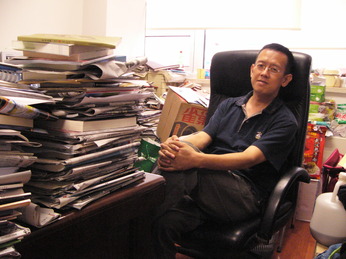 A journalist at Xinhua (China's state-owned news service) by day, science fiction writer by night, Han Song is one of China's best-known and most prolific authors in a genre that gets little notice or respect within the country. In his capacity as a state-sanctioned journalist, Han Song has seen much and been allowed to say little, yet his observations and considerations go into his fiction. He is a writer who has managed both to preserve his sense of wonder, particularly about all things technological, and to develop a finely-honed sense of social justice. Clones, alternate populations and psychological manipulation are themes that regularly crop up in his writing -- it becomes clear, reading his writing, that science fiction is merely a slightly warped mirror with which to reflect modern Chinese society. Han Song is a multiple recipient of the "Milky Way" prize, China's highest profile sci-fi prize, and is regularly cited as an influence by younger writers.

Han Song has authored dozens of short stories, published individually and in collections such as Gravestone of the Universe. He has written the novels Let's Go Look for Aliens, about UFO-spotters in China, Manmade Man, a novel about clones, and Subway, which is his most recent publication (2010).