The second annual Sino-English Literary Translation training course ended last Friday night, the conclusion of a week of workshops and seminars so tightly-packed that those of us present hardly had time to post. I hope other participants might chime in here with their thoughts, but I wanted to make a brief report.

The format of the course was much like last year's course, with twenty Chinese-English and twenty English-Chinese translators working in small groups with an author and a team leader to produce a consensus translation of their author's fiction. The English-language authors this year were Julia Leigh, Jacob Ross and Marina Lewycka, while the Chinese writers were Yan Lianke, Sheng Keyi and Wang Gang. My feeling was that the workshops ran much more smoothly than last year, perhaps because of smaller class sizes and more experience: we were having challenging discussions-cum-arguments starting day one, and kept up an exhausting level of intensity (both intellectual and social) throughout the whole week. The seminars and talks were excellent, as well, many of them focused on helping us wilting violets to get in print, and make something like a career.

Just two observations for now: my main take-away from last year's course was just how inadequately I personally had thought through so many questions regarding translation. While that feeling persists, of course, we seemed much more willing this year to challenge our authors and their texts, too. The group translating Yan Lianke apparently took an editorial axe to their passage (violence sanctioned, gleefully, by the author himself), and I was struck by how fluent and enjoyable their translation was, compared to the original (they were doing the opening of Fengyasong). Most translators wouldn't dare assume the role of editor, but in this case it was a controlled experiment, the author was present, and moreover something that we've suspected for a long time is becoming glaringly obvious which is that…

…Chinese editors do precious little editing of the novels they publish, and many writers only go through a single draft of their work, or something close to it. These are texts in need of the editor's kind blade. The last evening of the course we had panel with the six authors talking about their experiences, a thank-you-its-been-lovely event that turned interesting during the Q&A, when someone asked about editing and revisions. The three English-language writers had seen our versions of the Chinese texts, and all, with varying degrees of delicacy, wondered out loud at their verbosity. Marina Lewycka described her own writing/editing process as a process of cutting; Jacob Ross talked about the importance of spare, impactful language. Yan Lianke made a joke about the literary [in-]abilities of most Chinese editors; the two other Chinese writers seemed mostly happy not to talk about it. It was a very revealing moment, when a bit of tentative judgment showed through the diplomacy, and while I'm not sure it convinced me that translators could/should be editors, it certainly made the idea seem plausible.

The second thing was that we seem to be feeling our way towards agreement about how far a translator should go in familiarizing a text for foreign readers. Especially in Chinese literature, we're translating culture as well as language, and there's often a temptation to think "Western readers aren't going to get this, I've got to make it easier to digest." Howard Goldblatt and Bi Feiyu had a public conversation in which Bi Feiyu mentioned that two of his sex scenes, in particular, had caused problems with Western editors: one in which a girlfriend calls her boyfriend "brother" (哥), and another in which a husband tells his wife that, so long as they remain childless, he'll think of her as his daughter. Apparently the editors of these books' foreign translations deleted these two bits (one can imagine noses wrinkled in disgust), protecting their readers from something they saw as incomprehensible and distaseful. Howard described his arduous (and successful) battle to keep these bits in the English editions, which I think is ballsy and commendable. Real cross-cultural communication is like this: slow, awkward, and unsettling. And the books that come first necessarily pave the way for the books that come after.

Just for the record, I was seated between Sheng Keyi and Kong Yalei (translator of Paul Auster's Book of Illusions) during the talk, and they had a muttered conversation about these two passages in the Chinese. Yalei seemed to think both the "brother" and the "daughter" comments were perfectly acceptable in Chinese culture. "No," said Keyi, "the thing about the daughter is definitely weird."

PS: Sheng Keyi's already put up a couple of photographs on her blog. If anyone else posts photos somewhere accessible, let us know…

PPS: So far we've got Bruce's Chinese-language post on the week, another post, also in Chinese, by Shunhua, one of the Chinese participants, a whole bunch of photos from Alice Liu of Danwei.org, and a flickr set from Sky Canaves. 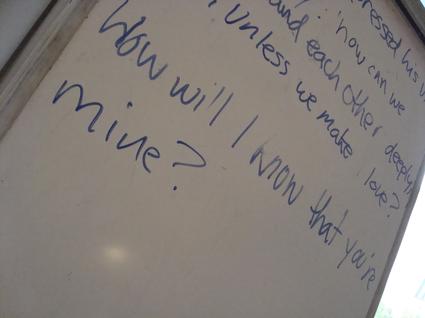 I have lots to add to your fine beginning here, but I do want to mention that I have begun writing my own diary entry in Chinese about "boot camp", and welcome your visits and comments too!

Apropos editing: Su Tong's new novel is out in the latest issue of Harvest, and it's gone through several substantial rounds of editing (it's also well worth reading if you get a chance). I don't know how much of that was done with the involvement of an editor, but this example, as well as a number of books by other authors that have been printed with facsimile manuscript showing deletions and amendations, indicate that at least some percentage of Chinese literature passes through multiple drafts.

Interestingly, Sheng Keyi also singled out the editorial process at Harvest as the only one she had any respect for. She said her manuscripts there go past three or four editors, and they edit for quality (as opposed to the typical sweep for typos and political incorrectness). So kudos to Harvest, though it's a little worrying that they seem to be the place that actually edits.

Thanks for the hint on the Su Tong, I'll pick up a copy of that.

One thing I thought I'd add - Bi Feiyu's (paraphrase) "If we never have a daughter, you'll be my daughter" still remains in the Goldblatt & Sylvia Li-chun Lin translation of 青衣 ("The Moon Opera"). It was also said when the couple was making love.

Whether this is appropriate and whether it feels awkward for the reader, I think is up in the air. Personally I didn't think it was anything to do with "vulgar" Chinese culture -- as brought up in the Bi / Howard 对话.

There are so many comments I would like to make about the week at Suzhou; I'm still reeling from its impact.

Will save it for a future date, or when this thread really gets going.

In fact, is it possible that Eric or someone else could post an excerpt of material translated and re-worked at the conference?

Danwei will be publishing the extract from the Wang Gang group and "The Curse of Forbes" some time in the near future. Penguin and the author gave permission, but Duncan Hewitt still wants to make edits -- he was our ringleader, after all.

What I'd like to see is the bit from Yan Lianke – does anyone who was in his group want to see if they can make that happen?

Didn't Jo Lusby just send out the excerpts? You could just get permission and do it.

I just thought someone who was actually responsible for the translation should give the okay, and maybe have a swing at editing it…

Eric, I think you should resist publishing the full raw drafts of these authors' works as they were translated at the CELT in Suzhou (2009), for two reasons:

1) The exercise was aimed at letting us experience group translation (immediate feedback, etc), not at creating a professionally translated, publication-ready text;

2) Once they go online, particularly in the absence of a fully proofread and edited version, these texts will be treated as representative of the given author's writing. Considering the uneven quality of the translations, that would be grossly unfair.

Bruce – fair considerations, certainly. I don't think we're putting all the samples up, just the bits we're pleased with. The Yan Lianke bit will definitely get a thorough going-over by a single translator, and we can make sure it's acceptable before it goes up.

I would like very much to see an excerpt or two from Fengyasong, in hopes that it may dispel persistent doubts regarding workshop-style translation--or workshop-style creative effort of any kind, for that matter. My limited experience with creative seminars has indicated that they are easily ruled by politics, tending to twist and distort essential criticism.

My only experience of workshop-style was this round in Suzhou (March, 2009).

In my eyes, the most useful "product" was the changes in attitude each of us experienced. Certainly, we now have more tools in our toolbox.

But in our group, at least, I found the written result was neither an accurate translation nor a compelling read.

It is doubtless unwise to look for quality in "translation by committee." That's not what the exercise was about!