Selected poems from Following Huang Gongwang through the Fuchun Mountains 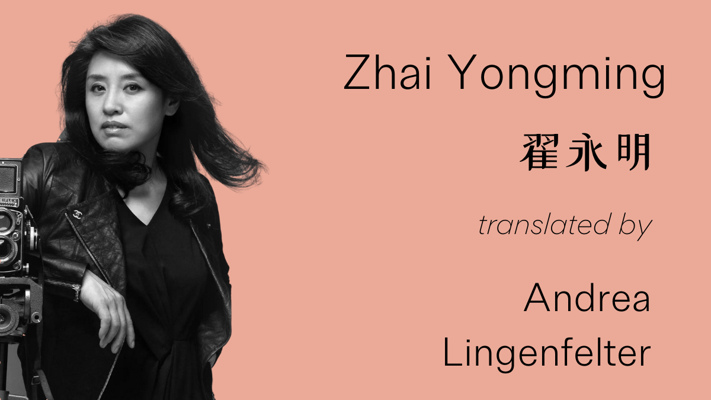 Zhai Yongming 翟永明 established herself as a major poet in mainland China in the 1980s with the strikingly visceral imagery and uncompromising feminist voice of poem cycles like ‘Woman’ and ‘Tranquil Village’. Influenced by mid-20th century American Confessional poets like Sylvia Plath, Zhai’s early poems resonated with readers and secured her place in modern Chinese letters. As Zhai Yongming has continued to develop as a poet, she has brought her feminist critique to China’s past, revisiting and reappraising historical figures like Yu Xuanji and Yang Guifei and presenting new interpretations that push back against historiographic misogyny. While much of Zhai Yongming’s social conscience is informed by her feminism (e.g., in poems like ‘Report on a Child Prostitute’), she hasn’t shied away from confronting other forms of inequality, such as the role of official corruption in the devastation of the 2008 Wenchuan earthquake (‘The Testament of Hu Huishan’). Throughout her career, she has remained socially and politically engaged.

In addition to her literary practice, Zhai Yongming has long been active in art circles, particularly in Chengdu, where her White Nights café and bar has been the site of many literary and art events and exhibitions. She herself has also put on installations. Thus, it should come as no surprise that Zhai’s interest in history and visual art would intersect with her social engagement as they have in ‘Following Huang Gongwang Through the Fuchun Mountains’ 随黄公望游富春山(2015), a book-length ekphrastic eco-poetic sequence on the 14th century painter Huang Gongwang’s (1269 – 1354) landscape scroll Dwelling in the Fuchun Mountains 富春山居圖. In this 30-poem sequence, Zhai meditates on the environment and environmental degradation, landscape and landscape painting, past and present, aesthetics, and world events. Zhai Yongming had earlier touched on these themes (e.g., ‘In Springtime’, ‘In Ancient Times’), but in ‘Following Huang Gongwang Through the Fuchun Mountains’, she goes deeper, and the leisurely journey through the Yuan dynasty ink painting affords her ample space to respond to the work and to reflect on its many layers of meaning. A hybrid text that incorporates abundant quotations, allusions, and footnotes, ‘Following Huang Gongwang Through the Fuchun Mountains’ has the richness of a scroll inscribed with colophons, or a traditionally annotated classical text.

Zhai Yongming’s encounter with Huang’s painting is a subjective-objective reading of the painting, and the poems chosen for this feature reflect the breadth of Zhai Yongming’s interests. Poem I introduces some of the historical background to the painting and includes the poet’s notes; poems V and VI, which don’t have notes, touch on the loss of body and soul of young people in the digital age and the healing and transcendental power of art respectively; poem VII focuses on one of the most famous incidents in the history of this painting, in which a self-centered and obsessive collector damage the painting in an attempt to burn it so that it would accompany him to the afterlife; and poem XXI, which appears roughly 2/3 of the way through the poem sequence, brings us to the present time (2014 or 2015, when Zhai composed these poems). In poem XXI, Zhai reflects on her gender and thinks about how she fits into a painting created at a time when women poets and artists were marginalized. She also reflects on the news of the day, which gives this poem a great deal of extra dimensions.

Zhai shows us how this landscape painting can remind us of all that we have lost as well as pointing to what remains and is worth preserving, and she also acknowledges the role of the artist as a witness and a custodian of historical memory. — Andrea Lingenfelter

In 1350, hand scrolls were cinema
you lean over and unroll it towards me
ink and scene  unfold in a leisurely rhythm
the lens tracks, pans
over the space between fingers and palms

Moving past a colophon the size of a thumb
entering the painting’s bony, craggy heart
I become a figure in dense and diluted ink
taking in the mountains
following Huang Gongwang  seeking Master Wuyong  visiting the Fuchun mountains
That year, he was nearly eighty

“Before the fall of rustling leaves  one already feels desolate
Walk with me across all six sheets of xuan paper, we’ll drop our fishing lines right here
These are not our twilight years”

I carry a stack of A4 paper, blue ballpoint pen
intrude on the rarefied air of the Remaining Mountain
falling leaves rustle  I too am desolate
Remaining Mountain has grown old  I too grow old

Line 2: In the poem, I imagined Huang Gongwang unrolling the scroll for a friend. The fashion in which a scroll unrolls horizontally from right to left allows the viewer’s gaze to move in a leisurely way, as if narrating a composition, which leads us to follow the painter’s journey through the landscape. Dong Qichang [(1555 – 1636, a late Ming painter, collector, and art critic who owned the scroll at one point)] remarked that when he looked at this painting, he felt “untrammeled in body and mind.” I felt this as well.

Line 10: It’s said that Huang Gongwang was 79 years old when he made this painting. He had returned home to the Fuchun Mountains from Songjiang, and he turned his hand to the painting of this long scroll in the southern building of his mountain retreat. However, he also often went out to make sketches or to simply roam the mountains. As a result, the scroll remained at his place in the mountains, and he could only “come back to it and bit by bit add a dab here and there,” which is why “he was unable to finish it within a space of 3 to 4 years.” When Huang Gongwang was 83 years old, Master Wuyong asked him to write an inscription on the painting to clarify its ownership, but the completion date for the painting is nonetheless hard to pin down. In the Qing dynasty, Wang Yuanqi, in “Notes on Painting from Lu Terrace,” says that it took Huang Gongwang seven years to finish the painting. If this claim could be confirmed, then we might also be able to conclude that, in the entire history of Chinese painting, this long scroll took the longest to paint and underwent the most revision.

Squeezed into a crevice between Heaven and Earth: bored twentysomethings idle in Internet cafés
no longer remember the way home
They’ve stopped smoking
stopped resisting
stopped going places
A virtual “self” appears
the “self” gets hooked on a glass of something blue
brains sleep deeply  nerves fire reflexively
keyboards to the left and right alter their glandular secretions

Other than airplanes, the soaring feeling of birds is no more
Other than black and white, the moon no longer casts its rays
I am no longer my “self”
Other than high-speed data retrieval
information no longer threads through our minds

A sudden electrical shock  your flesh deserts you
drowning your heart in the translucent orbs of your eyes
freezing it in a final lament of the soul — “Ai!”

What holds me spellbound for a moment and then
frees me from care to alight on the paper
fixes the power of the image in dots, lines, planes
expansive brushstrokes create time for deep thought out of ink wash

What makes me lose heart for a moment and then
concentrates my attention at length
makes images of stones, slopes, barren trees
enter the body, harmony of dense and sparse

I can only apologize

Yun Nantian, in his Ouxiang Hall colophon to the painting recounts: When the country was in upheaval during the “change of dynasties”, Wu Hongyu left behind the bulk of his property and collection [of art and antiquities] and fled with nothing but Dwelling in the Fuchun Mountains and the [Sui dynasty calligraphy master] Master Shiyong’s Authentic One Thousand Character Classic.

In the seventh Shunzhi year of the Qing dynasty (1650), when Wu Hongyu lay on his deathbed, he instructed his family to take his beloved Fuchun scroll and “burn it as a funerary sacrifice”: “On the first day they burned the Thousand Character Classic and Wu looked on as it was completely consumed by the flames. The next day, Dwelling in the Fuchun Mountains was put in the fire, sacrificial wine was added to stoke the flames, and when the fire was burning robustly, Wu Hongyu went to lie down in his room.”

By the time Wu Hongyu’s nephew Wu Jing’an was able to snatch the scroll from the fire, it had already been burned into two pieces, one long and one short; afterwards, the pieces were reassembled and remounted, the smaller portion consisting of nothing but ‘one mountain, one river, one hill, and one ravine’; later generations would refer to this section as the ‘Leftover Mountain’ painting.

In this poem, the ‘it’ referred to is always a reference to this painting which “refused to vanish with the wind.”

I could be a village wife a village auntie
or a woman knight errant  I could also be
a gatherer of herbs  or a woman Daoist
With the form of a woman, I walk the space between clouds and water
With a woman’s montage, I unfold and advance along the level surface
With a woman’s vision, I watch time flicker, now far, now near

In this age of images  I read
about what others have scrapped    about industry
Who is that? Dressed like ET
dressed in a metal suit  taking a walk in space
I spin and my gaze takes in
the minerals of the universe arranged into something wondrous

In this age of images  I read
Russian tanks rolling into Ukraine
Who is that? Clad in a black cloak
holding a crescent shaped scythe?
Behind him are the fallen, the mortally wounded

That is the border of the grand collision where centuries collide and flee
the border where weird Internet wars ignite
It’s the unfixed border where four-dimensional space is swallowed up
the border where spring is laid waste the moment it opens its eyes
the most beautiful most awkward forsaken border
enchanting, dispiriting
the border so massive it’s hard to see

The more I am still  the more it is restless
Do the fires of war linger?
Are families being scattered?
I weep bitterly  and it
is unmoved