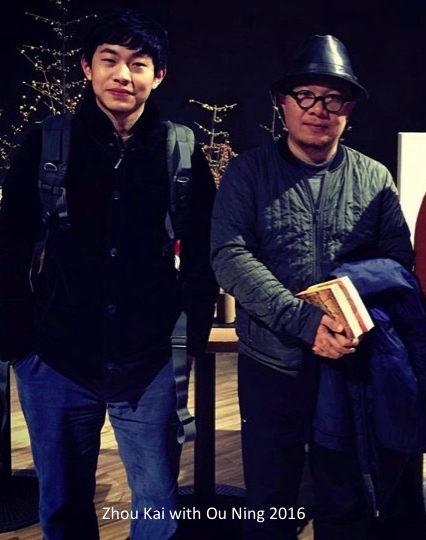 Zhou Kai was born in 1990 in Leshan, Sichuan province, and works in TV. In 2012, he sent a story to Ou Ning, the founder and editor of the magazine Chutzpah. Ou Ning immediately published it, describing Zhou as a most exciting and talented new writer. Ou Ning has written an appreciation of Zhou Kai especially for Paper Republic:

When I first read 《阴阳人甲乙卷》／Yin-Yang People: A Tale in Two Parts, a short story sent to me by Zhou Kai which had been rejected by several other magazines, I was struck by this young writer’s intelligence. The story had an extraordinary boldness and showed a maturity far beyond his years. He had taken the rough, wild, sometimes fantastic stories of remote Sichuan and woven them together in a provocative experiment in dialect writing. I felt, then, that in Zhou Kai, the Sichuan writer Li Jieren (1891-1962) had found a youthful successor. I published Yin-Yang People: A Tale in Two Parts, in my bi-monthly literary magazine Chutzpah issue nine, and subsequently published two similar Zhou Kai stories in issue ten (《如她》/Like Her) and issue twelve (《牛象坤》/Ox = trigram). The English translation of Yin-Yang People came out in issue thirteen. Soon afterwards, Zhou Kai started writing his first novel. When he sent me the first chapter (《盲无正》/Hopelessly Blind), I saw a dramatic change in his style. This is a surreal fable, set in no particular time or place; Blind Village is a wild place, a village of illusion, whose inhabitants are alive merely in the simple biological sense. The village elders are blind, their progeny have gradually evolved to see the light, but all are plunged into total darkness for a period when the sun disappears. This story is about the extraordinary things they do to survive. With no cultural trappings or references, it appears to hark back to primeval humanity. As such, I see it as a deeply philosophical story, highly experimental in the current literary climate of China. I published it in Chutzpah issue fifteen and at the same time commissioned an English translation. I was keen also to help promote the novel that Zhou Kai was writing and, in issue sixteen, which focussed on the ‘89 plus Generation’ of writers born after 1989, I published chapter two of Zhou Kai’s novel, Chronicles of Bird-Trapping. When I was chief editor of Chutzpah, Zhou Kai was the young writer I most liked and I have kept in close contact with him ever since. His work not only challenges taboos and traditions, it also challenges the translator! I am grateful to Bonnie Huie, translator of Yin-Yang People, and Eleanor Goodman, who translated Hopelessly Blind, for taking on this arduous task and initiating English-language readers into the mysteries of Zhou Kai’s writing. (Translation: Nicky Harman, January 2016)