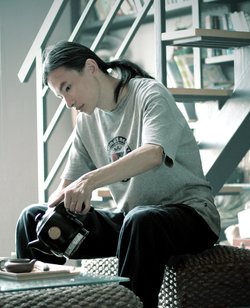 Born in 1975, Pan Haitian belongs to the so-called third generation of Chinese science fiction writers—those who have begun to branch out from the traditional definitions of science fiction. His writing moves effortlessly between science, fantasy and fable; his most representative work is Run, Dajiao, Run, a fable-like tale of a boy whose search for medicine takes him through a series of dreamlike locations. City of Clones comes closer to hard science fiction, but still it is Pan's commentary on human nature that forms the centerpiece of the story.