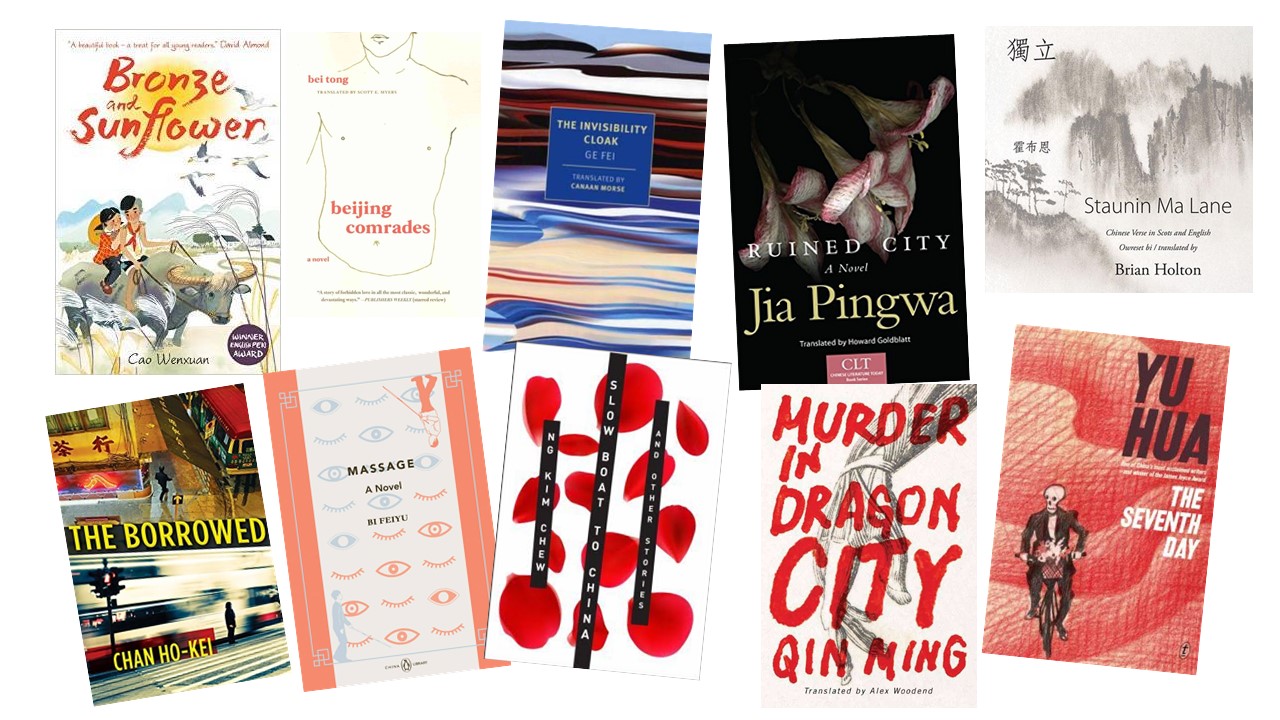 As usual, we have assembled a list of book-length translations from Chinese into English over the year. Congratulations to all authors and translators! This year’s list is longer than ever, and several books have won international prizes. Your additions, comments, corrections to this list are welcome - please leave a comment below and we’ll update the list. This is our fifth annual list; previous lists are here: 2012, 2013, 2014, 2015...........

Congratulations to everyone who has won a prize, or made the long/short lists this year! In no particular order,
Bronze and Sunflower, by Cao Wenxuan, translated by Helen Wang (Walker Books), shortlisted for the Marsh Award for Children’s Literature in Translation 2017
Crystal Wedding, by Xu Xiaobin, translated by Nicky Harman (Balestier Books), longlisted for the 2016 Financial Times / OppenheimerFunds Emerging Voices Awards
The Four Books, by Yan Lianke, translated by Carlos Rojas (Chatto and Windus), longlisted for the Man Booker International Prize 2016, shortlisted for the 2016 Financial Times / OppenheimerFunds Emerging Voices Awards
Aroma’s Little Garden, by Qin Wenjun, translated by Tony Blishen (Better Link Press) – winner of Shanghai Translation Grant
The Seventh Day by Yu Hua, translated by Allan Barr (Pantheon), shortlisted for the 2016 Financial Times / OppenheimerFunds Emerging Voices Awards
Wang Anyi, winner of the 2017 Newman Prize for Chinese Literature, announced September 2016
Luisetta Mudie, winner of the Writing Chinese/Read Paper Republic translation competition, 2016
John Minford, winner of the inaugural Medal for Excellence in Translation (Australian Academy of the Humanities) for his Chinese-to-English translation of I Ching (Yijing): The Book of Change (Viking).

Amazon Crossing is doing good work here too! Also: Hong Ying's Good Children of the Flowers is not a book for children, so you might want to change that.

Thanks, Anna. I just changed it.

"Tibet on Fire: Self-Immolations Against Chinese Rule" was translated from Chinese into English and published by Verso Books in January 2016.

The author is Tsering Woeser and the translator is Kevin Carrico.

Thanks! Do you have the original Chinese title handy?

A bonanza year! And great to see such an array of translators--many of whose names I've never seen before.

It looks like the golden age of contemporary Chinese poetry in English translation has ended, though.

Thanks High Peaks Pure Earth for mentioning Tibet on Fire. I first read the book in French, and then used both the French and the original Chinese text in translation.

@Lucas: It was hardly long enough to qualify as an "age"! It was good while it lasted, though.

@Kevin: I've added the book to the database, and now you have a page as translator here. Let me know if you'd like to put any more information on that page, or if you have other translations you'd like to list. Thanks!

I've gone in and made changes to add the translators for the By the River anthology and Li Zhi's Book to Burn and a Book to Keep (Hidden) collection, to correct the poet's name to Ya Hsien for Abyss, and to add Red Pine's Finding Them Gone under poetry.

Keep in mind this stuff is all in the database as well:

on Interview with Helen Wang, Translator of Cao Wenxuan

on Han Song's "Hospital" Trilogy: A Chat with the Acquiring Editor