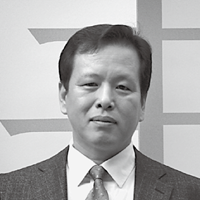 Li Jingze was born in Tianjin in 1964. After graduating from Peking University in 1984 he spent time working at various literary journals before moving to People’s Literature magazine. Best known for his works of literary criticism, he received the 2004 Lu Xun Literature Prize for Bearing Witness to a Thousand and One Nights, a collection of monthly articles originally published in Southern Weekly newspaper. In February 2014 he became the deputy chair of the Chinese Writers’ Association.