What did you say it was?

Recently my in-laws came to visit, and while they were here we found ourselves, as is our wont, singing old Cultural Revolution songs. So far 物产阶级文化大革命 The Great Proletarian Cultural Revolution is Good is my favorite, in part because it’s got a great bouncy rhythm, but mostly because the lyrics are batshit insane. Here’s the chorus:

How’s that for nuance? More comes later, about overthrowing the imperialists, but really all you need to know about the Great Proletarian Cultural Revolution is in the first, second, third and fourth lines of the chorus. The curious thing about this song is the phrase 就是好, which translates most simply as ‘It is Good’, but actually conveys something along the lines of ‘It is Good (And That’s Final – No Matter What Anyone Says)’.

The point of the song, in other words, is not simply that it’s good, but that it is a priori good; it is good without needing any reason to be good; the answer to the question ‘is it good?’ is already ‘yes’ before the question is even voiced; in fact, we’d really rather you didn’t ask that question, because simply asking sounds suspiciously like doubt. You wouldn’t be looking to get struggled against, would you?

This sort of brute-force use of language is deeply characteristic of those times (it has by no means disappeared), and I think both horrifying and fascinating to anyone who works in words. It’s hard to say to what extent it was meant to be an explicit warning to anyone who sung or heard it, and to what extent simply a manifestation of an era when right and wrong were so self-evident that people took a kind of joy in denying the need to think.

Wang Xiaobo mentions the song, in an essay tellingly entitled ‘The Plight of the Intellectuals’ (知识分子的不幸):

Those four repetitions of ‘it is good’ thoroughly preclude all possibility of rational discussion. Because of blind faith, no one wanted reason. I personally believe that the renunciation of reason is a worse thing than a field of corpses. Once reason has been renounced, furthermore, it’s likely to lead to fields of corpses – no small number died during the Cultural Revolution, and it also caused a general decline in the intellectual abilities of the nation.

The kicker is, it’s a really catchy tune (you can download it here), and once you get that first line in your head, it’s hard to dislodge. I’ve been humming of it over to myself in bus stops and cafés; so far no one has been moved to join in. 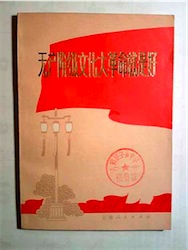 Whenever I hear this song, I'm always struck by how similar the first two bars are to "Rebellion is Justified," and then I'm reminded of the closing lyrics to that song, 干社会主义！ (Which I guess people are still doing now, only in a different sense.)

What did you guys think of the new Jiang Wen movie? I thought it was funny, the guy next to me was screaming '我靠！' throughout the entire movie, and I overheard people saying they wanted to see it again. The friend I saw it with thought it was funny, but also noted on how in 1976, as the Cultural Revolution was winding down, things were, in fact, very ridiculous. Despite being from a later generation, she sees many sad things in her own life from the Cultural Revolution. Her father was sent to the countryside and later married his wife, my friend's mother, for her class background, an odd and difficult to grasp notion. Great post.

Here are two old chestnuts (from the Gansu portion of Ai Weiwei's "Fairytale" documentary) that ended up on the cutting room floor:

Seriously, we should consider a more extensive post, perhaps even a category, on these revolutionary songs and slogans.

Everybody has their favorites, including recently updated "revisions" of the old lyrics. I can think of several well-known contemporary Chinese bands that have played fast and loose with the old songs.

This could be very fun.

You guys ever watch the 8 ballet-operas of the Cultural Revolution? ba yangxi, or something? I think Red Detachment of Women and The East is Red dominate this song hands down.

I like this post very much! 就 alone is also indeed a wonderful and mysterious morpheme... I have heard that the young students in 1989 sung the song 没有共产党，就没有新中国 (if it were not for the Communist Part there would be no New China), but left out the 就 singing 没有共产党，没有新中国 (there is no Communist Party, there is no New China). One character deleted and the meaning is changed from rosy-cheeked propaganda to bitter sarchasm --伟大！

No way, the yangban'r xi are awful! The East is Red is like the orient's answer to Wagner, and that's not a compliment. At least, with TGPCRIG, you've got that intense are-we-crazy-or-are-we-having-a-good-time kind of energy. I'm sticking to my guns on this one.

I just bought a pirated DVD of The Sun Also Rises yesterday, haven't watched it yet. However, I believe it's adapted from a short story by Ye Mi, and we've been talking about translating that story, keep an eye out…

Although this thread is probably cold and dead by now, I wanted to respond to the cool stuff everyone wrote.

(for those of you referencing this posting in haiku form, the poetic translation is as follows:

The thread was near-dead. The poet didn't know it. Geming never ends. )

"Whenever I hear this song, I'm always struck by how similar the first two bars are to "Rebellion is Justified," and then I'm reminded of the closing lyrics to that song, 干社会主义！ (Which I guess people are still doing now, only in a different sense.)"

...Omigod, the possibilities for 2007 (liberally re-wrought/ over-wrought) translations for that tune are mind-boggling. Here are some catchy new titles:

...yes, minus 就 the song becomes almost nihilist, doesn't it? Here's my translation/transposition:

By the way, I ran across something a few years ago, a series of Chinese humorous couplets/打油诗 that were a piss-take on those same lyrics you cited. They went something like:

Without the Communist Party there would be no New China

Without the New China there would be no revolution

Without the revolution there would be no sexual revolution

Without the sexual revolution there would be no (...?)

I honestly can't remember how it went, but it was funny as hell. If anyone can remember this bit of doggerel poetry, I would be very grateful.

Is anyone here familiar with the non-model/banned Peking operas filmed in 1975-1976 on orders from Chairman Mao? Apparently, Mao requested command performances from some of China's finest actors, directors and cinematographers (at a secret location in Shanghai) to put some of the classic - and at that time, banned - operas on film. I've heard tell of this from several older Chinese directors, and youngish director Li Ying has done a short documentary on the subject for NHK (only available in Japanese, I think...the title is "Mao's Secret Cinema").

Another possibility for the old model operas would be ironic re-dubbing, a la Zelig or some of the things we see on You Tube. I can't imagine anyone would object, and it would be terribly fun.

Many of the old slogans sound funny today. “干”社会主义？That would sound like 'f--k socialism'. And 干革命, f--k the revolution. As for the word 同志(comrade), it has come to mean 'homosexual'. Imagine how Mao would blow his top if he were alive today!