The following was provided by Stacey Duff, Art Editor of Time Out Magazine. 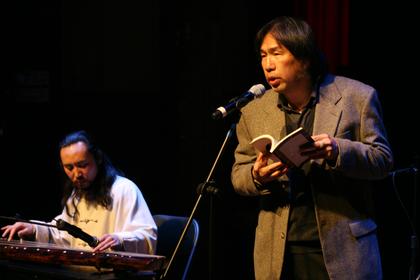 Hauge spent his entire life working as a fruit farmer. Reading these poems, you immediately sense a closeness to the land. Frequent appearances are made, for instance, by the sea, the moon and the wind. Hauge's earthiness is furthered by the fact that he spoke and wrote in the dialect of Western Norway, where he lived.

Hauge's poems were translated into English as early as the 1980s by noted American poet, Robert Bly. In a way, Bly is ideally placed to be Hauge's American translator – he lives in the rural Northern US and comes from Norwegian stock. English-language readers can also find a recent selection of Hauge's verse, published in 2008, and reviewed here at coldfrontmag.

Hauge's Chinese translation – titled 我站着，我受得了 (I'm Standing, I Can Take It) – was launched on February 28 at Ma Wood Theatre, a restored 700 year-old Taoist temple just up the hutong from Bed Bar here in Beijing. Hauge himself would have been thrilled to see his work read in China. He read widely, taking in American, European and Chinese literature. Some of his poems are epistolary, like this one to Li Bai:

Xi Chuan read the translations at the launch, accomapnied by a guqin player . A poetry reading set to the guqin, for those who haven't heard one, is a nice variation of the standard no-frills poetry reading. There are no silences, for instance, between poems as the poet flips through the book looking for the next one to read. The guqin fills that space nicely. The most memorable and impassioned moment, for this observer, came from Xi Chuan's reading of the title poem. You could feel and hear in Xi Chuan's spoken performance the affirmative and grounded stubbornness that's true to the written poem:

The event, hosted by the Norwegian embassy, was well attended. The second half of the reading came courtesy of a three-piece jazz-folk-fusion trio from Norway's Vision Theatre Company. Tore Brunborg and Thomas Stronen provided sax and percussion while Juni Dahr vocalized many of Hauge's poems. Dahr's vocal range and her expressive stage manner really brought the poems to life. The performance also gave a rare opportunity for Beijing audiences to hear the unique texture of Hauge's original Norwegian. That texture – both earthy like the soil on which Hauge grew his apples, and pulsating, not unlike the sea that surrounds his country – is impossible to emulate with ease in either English or Chinese. But now at least, readers in both languages have a place to start digging. Stacey Duff

Liu Baisha's comment brings up for me an interesting point, which is what happens when we translate into English via another translation, in this case a Chinese translation of a Norwegian original. While I can see the difference between Duff's

Look, when we eat, we'll still be standing here.

Look, I also stand here when I eat.

I stand when I eat too, I do that, do you understand.

I can't imagine very many translators coming up with a line like that when translating into English from Chinese, where the "你看" fits best at the beginning of the sentence.

For the record, Hauge's original can be found here, and the line in question is:

I don't know Norwegian (and the Google translator is no help, either), but I can see that "seddu," which is what in Chinese we have as "你看" and Bly gives us as "do you understand," is at the end of the line.

It's also a much punchier line, I think, than Bly gives us, but much closer to what Xi Chuan and Liu Baisha have given us. This conforms to much of what I've heard of Bly as a translator: in his version of "Eg stend eg, seddu" ("I Stand Here, Do You Understand"), he takes up much more space on each line than Hauge, but for some reason has a poem of one less line than Hauge's. He also has "Kor lenge skal me stå her?"--what in the Chinese is "我们需要在这站多久？"--as "How long are we to stand here, do you understand?" one time, where he has added the "do you understand" with no textual basis, but as "How long are we to stand here?" a second time, so that Hauge's true repetition does not carry through.

Bly's translation is on p. 43 of The Dream We Carry, with some of the poems done by Bly, and some done by Robert Hedin, another Minnesota writer. In fact, the poem that Duff quotes above, "Til Li Po" ("To Li Po"), is in Hedin's translation, not Bly's. Duff seems to have quoted from the linked review, which--par for the course for most reviews--does not discuss translation in detail and does not attribute the work of translators when it cites them. Another selection of Hauge's poems can be found in Leaf-Huts and Snow-Houses, translated by Robin Fulton, a Scottish poet and translator who has lived in Norway for 35 years.