Thursday night was China Literature Night, the largest gathering of Chinese writers during the fair. Mercifully, most officials had gone home at this point, and we enjoyed the rare treat of a major cultural event that did not begin with long-winded speeches by someone with a title. It was a thrilling sight for a Chinese literature fan: the front row of seats were occupied by Liu Zhenyun, Su Tong, Xu Zechen, Li Er, Ah-Lai , Yu Hua, Mo Yan, Tie Ning – I'm finding it difficult to avoid the words "power lineup". They jumped right into it. The first round was a conversation between Tie Ning and a German sinologist named Ulrich Kautz. I'm not too familiar with German sinologists, but he had snow-white hair, a Zhongshan suit, and a bit of an attitude – clearly a sinologist. 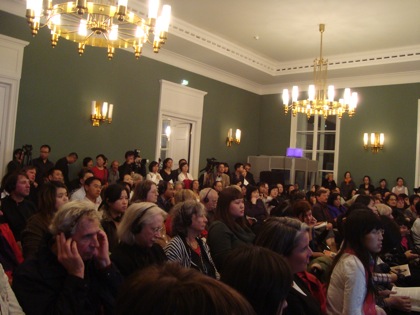 Now I know what everyone thinks of Tie Ning as the head of the Writers Association, I've thought many of the same things myself, but my heart goes out to her every time I hear her speak. Ulrich's first question was about being a woman writer and feminism and all that, and she was so clearly tired of this particular question that she came as close to being dismissive as a diplomat comes. When he later asked about her balancing act as writer and official, her regret over losing her time and freedom seemed perfectly genuine ("When they say 'go attend this event' I can't say no. When they say 'go have a conversation with Ulrich Kautz' I can't say no."). I feel better disposed towards her every time I hear her, maugre her actual writing.

Then came Li Er reading from Cherry on a Pomegranate Tree. There were several readings during the evening, with a German translation being read alongside (the other conversations were translated simultaneously via earphones). Li Er, Xu Zechen, Tian Er and Annie Baby all did their duty, and it was a reminder how uncomfortable most Chinese writers are with public performance. In all cases the German translation was much more lively – the reader made German sound, if not beautiful, at least expressive.

Next was a conversation between Li Jingze, one of the most respected literary critics in China, and a German writer, on the subject of the relationship between writer and critic. At this point, jetlag and an excess of fine German beer conspired to remove me temporarily from the proceedings.

The most entertaining part was a four-way conversation between Liu Zhenyun, Su Tong, Yu Hua and Ah-Lai. They did splendidly what Chinese writers often are good at doing in public: telling stories, making jokes, and generally being charming. The host asked a few questions and they were off – mocking each other, complaining about German food, and clowning – I began thinking of them as the Four Tenors. There wasn't a lot of literature (only Ah-Lai bothered talking seriously about books), but it was plenty of fun.

Last up was Mo Yan, talking to Tilman Spengler, a German author and "China expert". Mo Yan started off by saying that when he was younger he'd been deeply curious, and read broadly, but the older he got the less curious he became. He suspected that this might hold true for countries as well; both China and Germany were old countries and couldn't be expected to show too much interest in each other. From this rather ambiguous beginning the two had a conversation about cross-cultural communication, or rather Spengler launched into a couple of very intense speeches which were lost on me as I'd neglected to procure headphones, while Mo Yan sat and smiled beatifically upon the room at large. The general gist seemed to be that German readers approached China-related material from a position of grave ignorance, and tended to assume China was still mired in the Cultural Revolution. The time slots were short and lengthy conversation wasn't really possible (which seemed to suit Mo Yan fine, I got the feeling he would rather have been the Fifth Tenor), so that's as far as things went before we up and fed ourselves. Not a bad evening, all in all.

eric, is there a possibility that audio of the four tenors' comedy hour is out there?