St. Jerome may be the patron saint of all translators, but for those of us working in Chinese literature, David Hawkes is something like a living buddha. His work on the first 80 chapters of The Story of the Stone would be enough, but there's also Songs of the South (translations of Qu Yuan and other 楚辞), and A Little Primer of Tu Fu, an authoritative introduction to the Tang dynasty poet Du Fu.

Hawkes, now long retired, lives in Oxford, and when we were in London recently, we made a special trip up to the original college town (absolutely beautiful) to pay him a visit. He and his wife graciously received us, and fed us, and we had two short hours to talk about China and Chinese literature. We exchanged reminiscences about Beijing – apparently we have lived in spots only a few blocks apart – which I later had to re-evaluate when I realized that the last time he was in Beijing it still had its city walls, and he arrived there by steamship.

At one point we talked a bit about the poetry in The Story of the Stone, and Hawkes got a semi-pained look on his face. "It took ever so long to do the poetry," he said. "Really just ages." He looked genuinely aggrieved that he should have spent so much time on it, and I felt like laughing: The Story of the Stone is arguably the best work of Chinese-English translation out there, in a class by itself, and it is precisely the poetry that is so jaw-dropping. That he could have taken these famous scenes of the idle rich sitting in their gardens, trading clever, intricate poems, and translate them not only adequately but brilliantly, never dropping a stitch, is nearly unbelievable to those of us who struggle to find two words that rhyme. And yet there he was, apparently regretting the effort. Perhaps he was just being polite.

Later he mentioned that he had essentially given up on Chinese, both literature and language, several decades ago. "I don't know," he said, "I guess we shouldn't dismiss an entire literature just because the people who created it later do things we find… disappointing." (He was talking about the Cultural Revolution) Later he did admit that he had recently started reading Chinese again, and with a grin pulled out a copy of Qing Dynasty Medicine-King (大清药王), a novel adapted from a recent TV series, saying he had quite enjoyed it. There is hope yet.

Later in the trip I finally got my hands on a copy of The Story of the Stone, A Translator's Notebooks, essentially bound facsimiles of the hand-written notebooks Hawkes kept while translating the book. I've only just begun to thumb through it, but here's one of the pages where he's working out a poem's rhyme scheme: 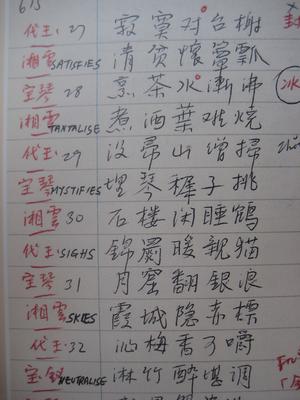 Very interesting! It's funny because I had just recently been thinking about how to translate contemporary Chinese tv dramas into English-language books. Apparently some of the Chinese-language books already exist.

The Translator's Notebook looks great too. Looks really hard to find though...

It is hard to find! You're welcome to borrow my copy, though :)

Hah, well there's a chance I'll be in China this year. If so, I'll try to get in touch!

Oh that is so cool! Looking forward to hearing a detailed report from you at some stage Eric.

Did he mention what he did in the meantime between sort of giving up a few decades ago on Chinese literature and now? I think I remember reading somewhere that he had an interest in Japanese literature too?

Great post. Where did you find the book? I've been trying to buy it for years. Was fortunate enough to skim through a copy at Univ of Hong Kong in 2007. Haven't seen any other copies since.