A Pause for Nerdery

The pause that refreshes! Just a couple of days ago I got a new Kindle 3 thanks to some intrepid cross-Pacific muling (thanks Canaan!), and while I have refrained from actually drooling on my shirtfront in public, I am, to say the least, enthused. To spare the unimpressed, screen shot etc is after the jump.

Mostly I was looking forward to seeing how it displays Chinese, and the answer is: just fine. 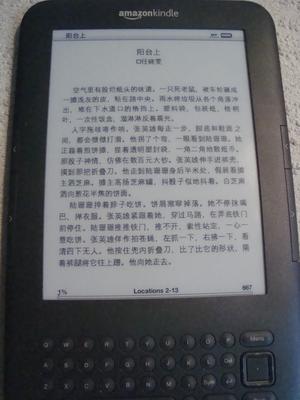 [Pictured is a short story by Ren Xiaowen]

This was converted from a DOC file, and the characters actually look a bit better if you feed it a PDF file. The PDF formatting is fixed, however, so you have to make sure it's the right size and layout before you stick it on there. On the other hand, I've run into encoding problems converting DOC and TXT files (you email them to your Amazon address and they are converted and delivered to your Kindle wirelessly, isn't that nifty), somewhere along the line the Chinese gets munched, I blame less-than-rigorous adherence to the Unicode Way. More experimentation to come; mostly I'm thrilled that now, when writers send me digital files of their work, I don't have to spend yet more time in front of the computer reading.

Lest anyone accuse me of shilling, I only got this old thing until Shanda comes out with the next version of the Bambook.

Keep us informed, I would really like to know about the fonctions, for example : can you dowload dictionaries (take it to the beach and work seated on the sand hearing to the sea.. all things for which my Mac is a bit too big and sensitive...)

It's comes with the Oxford Dictionary of English and the New Oxford American Dictionary, these are remarkably easy to use, and feature the same incremental narrowing down of search terms that you get in a Google search bar. Beyond that I haven't experimented. There is a built-in function (rather annoying, actually) which pops up a dictionary definition for words you place the cursor on, but expecting that for Chinese characters would be Too Much (I refer you again to some future hypothetical version of the Bambook).

I have found that, when it comes to digitizing Chinese dictionaries, or making Song-dynasty lexicographies accessible in an iPhone app, it's best to just sit back and let Brendan work it out.

So then I got kind of annoyed by the whole question, but all I've found is this (year-old) thread on getting other languages on the Kindle:

Presumably the unicode issues have improved with the Kindle 3, but there's still something I'm not getting…

I don't know anything about getting dictionaries onto the Kindle, but there are some pretty good dictionaries floating around out there for "free download" if one knows where to look, and there's software available to convert them to a format usable by the Mac OS X Dictionary.app. (And presumably by whatever Linux uses as well.) It'd be pretty awesome to have something like the 漢語大詞典 or 辭海 available on an e-reader device: I haven't heard about anything of the sort yet, but I assume that if the copyright holders on those works don't make something available, somebody else will.

I wish Chinese Amazon could provide some Kindle books in Chinese. At least as PDF.

The real solution to the problem would be to sort out the whole unicode issue, so everything's properly encoded. UTF-8 FTW!