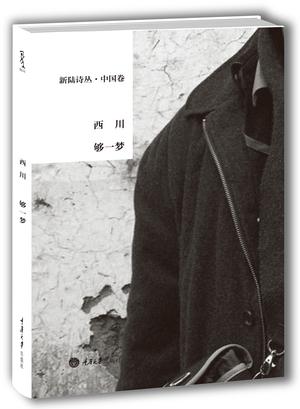 Enough for One Dream is is published by Chu Chen Books as part of their “New Ground Poetry Series,” which in its Chinese section also includes Zhai Yongming, Han Dong, Yang Li, Yu Jian and Chun Sue. Enough contains fifty-five individual pieces, all of which were written in the decade-plus from 2000 to last year. Most have been published before, either in earlier collections or magazines, and several of the best-known pieces, like 墙角之歌 (Song of the Corner), 南疆笔迹 (South Xinjiang Notes) and 无关紧要之歌 (Song of No Matter) can be found in Lucas Klein’s recent translation, Notes on the Mosquito, published by New Directions Press. By Xi Chuan’s and my count, a total of thirteen poems in Enough have not been previously published in their current form. I list their titles here:

大国 A Great Nation
真理辩论会 （新稿） The Debate Over Truth (a new draft)
白苍蝇 White Fly
一条迟写了二十二年的新闻报道 A News Report, Written Twenty-two Years Late
死于感冒的人 A Man Who Died of a Cold
书于汶川大地震后一个月 Written a Month After the Wenchuan Earthquake
论摄影 On Photography
从一件事想到另一件事 Train of Thought
但什么力量使树不再成长 But What Force Stops Trees from Growing
乘飞艇自东涌至三门岛 On the Hydrofoil from Dongyong to Sanmen Island
过罗湖海关从深圳返回香港 Passing Customs at Luohu, Returning to Hong Kong
晨光，西宁。2011年8月 Morning Light, Xining. August 2011.
飞机飞在高空 The Airplane in the Sky

In addition to these, there are a couple of important poems included here that are not available in Notes; we’ll get to those shortly. Enough is divided into three sections, its poems grouped according to subject and sub-genre: the first section, for example, features long poems like 垃圾吟 (Garbage Chant), 南疆笔记 (South Xinjiang Notes) and 曼哈顿乱想 (Wild Thoughts in Manhattan), which focus to a greater or lesser extent on social reality as the poet understands it. Poems in the second section depart from that crowded and suffocating environment and proceed inward, towards dream and fantasy, or outward, towards (equally fantastical) traditional myth. The last section is “about leaving the house,” as Xi Chuan put it himself, consisting mostly of poems written abroad or related to questions of travel and distance.

Like most of his Chinese contemporaries, Xi Chuan works with broken lines and whole grammar; that is, he writes in complete sentences. Yet he doesn’t like to oppose artificially the full sentence and the incomplete line as so many other Chinese poets do, missing caesurae in a way that often feels derivate. Not to stray too far from the text, but contemporary western poetries have had such an affect on poetic language and aesthetics in China that one can find many a Chinese poem which echoes clearly the voice of Sylvia Plath, William Carlos Williams, Ted Hughes, or Jorge Luis Borges (because you’re not all tired of hearing that name already). Yet it would be difficult to make the same claim about the poems in Enough for A Dream; they are not merely individual, they are unassailably Chinese.

Local language allows these poems to represent their respective subjects with painful honesty—not through invective, but rather through a soft, playful sarcasm that appears to be one of the hallmarks of Xi Chuan’s work. Nearly every poetic statement in the first section of Enough is satirical, invented or absurd, yet can provide the reader truly useful information. The mechanism of irony, which is merciless as only humor can be, slips the knife between the ribs and twists it. Here are two stanzas from the fifteen-page poem “Wild Thoughts in Manhattan”:

In the Manhattan rain, only one ten-millionth of all rainwater falls on your head.
Manhattan wind slips between skycrapers, thins into razors, shaves off
your beard. Yet in order to put on a “true” China, you have to put on a
“fake China,” that is, you have to paste a false beard to your cheek.

You have to sell your nationalism to the global market like you’re selling salt fish, or
protest other people’s nationalism like protesting salt fish. You’re responsible for
guarding your fish-board with its buzzing flies, as if this were the only way to get
to the market management office for your permit to buzz around like a fly.

This excerpt accommodates a wealth of interpretations, especially as China is being accused of exporting censorship abroad. And two more excerpts, from another long poem, called “Attempting to Define ‘The Crowd’ From Its Most Frustrating Angle”:

“Changing customs and habits” is the ideal; “not enough to go around” is the reality.
Let us develop athletics, then; the goal is to improve the people’s fitness.

I can’t imagine how anyone who has lived in China for any considerable period could read that and not wince out of sympathy for the regrettable nastiness these lines uncover. In the context of Beijing, where Kitty Genovese cases can happen on a regular basis, and everybody knows it, the reference to 围观 is damning. This soft yet bitter satire extends its focus to a wide range of subjects in the first section of Enough for a Dream – politics, history and collective identity are but a few – and echoes in the poet’s treatment of the Western world in the poems that follow.

One of the most noticeable methods by which the narrative creates a satirical effect is an expansive introduction of a linguistic signification followed by a contraction of that signification. “Athletics” works that way in the passage translated above: a strong four characters long, it is introduced as the object of the grandiose verb 发展, “develop,” yet in the second line it is associated with the utterly ignominious practice of 围观, rubbernecking, and all the air comes out of the tire. We see a similar phenomenon at another point in the same poem:

In the high-energy environment of the poem, any image when first introduced is made vast by its potential significance. Xi Chuan brings those images in as they are, and then, through a simple repetition or a partial denial, deflates them. The reader becomes spectator to a farcical event, and is tempted to laugh. This ironical disbelief of the narrator’s own discourse appears with variations so often throughout the poems in Enough for a Dream, we should be able to consider it characteristic of Xi Chuan’s poetic voice.

Judging from what Xi Chuan told me when I went to him to talk about Enough, there appears to be a contingent of poets in China who don’t consider his work poetry per se, because it isn’t lyrical enough—or “clean” enough, to use Xi Chuan’s own description. Perhaps because I came to this book expecting to read “poetry,” or because I hail from a thoroughly blown-open Western poetic tradition, or even because I understand poetry to be as much a way of reading as a way of writing, I found in this book very little to support such a conclusion. Even if one did try to read the poems in Enough as bare texts, those texts frequently realize the myriad effects we expect from poetry, and, stylistically, they blend the lyric and the anti-lyric with surprising skill. As we read “Crowd,” a poem that leans frequently on the long, anti-lyrical discursive line, we suddenly come across this:

If the reader can look past my poor translation, he may still realize the intensity of and complexity of the original Chinese, the vigorous rhythm that adds to the complexity of the message, and which is also highly reminiscent of the style of Han-dynasty 贾谊 and his poem “The Owl” 鵩烏賦. What’s important is the relation of the lyric to its context: so many of the Chinese poets I’ve read who have tried to be lyrical in a logical vacuum -- Bei Dao and Yu Jian come to mind – frequently fail because they have no hard ground to jump off. In Enough, that which some call lyrical beauty is sporadic and seems accidental, as if it were the natural by-product of adventuresome thought.

There are a few clunkers in here, too, pieces in which the aforementioned satire seems more like a superficial trick than a profound instruction. No collection ever avoids such. Yet the number of good poems is astonishing, especially of good poems that tell the reader something he couldn’t have known before, and this is why we should all hope to see more work by Xi Chuan in English.

This concludes the informative section of the review. Xi Chuan has graciously given me permission to post one of the brand-new poems in Enough for a Dream here at the end of this review. The poem, “Crossing through Customs at Luohu, Returning to Hong Kong,” which represents the poet’s style so well, articulates the complex emotional relationship between the Chinese mainland and Hong Kong, the ex-colony that motivates irritating questions of identity. Coincidentally, I read it while I was standing in line on the Hong Kong side of the same border crossing, on my way home to Beijing via Shenzhen. One complex emotion inspired another, and I wrote a response, in which I tried intentionally to imitate the perspective of the original. I post it here, to illuminate the advantages of the other.

Eric has suggested the translation of the title be A Dream's Worth, which not only sounds nicer to my ear, but also inspires more diverse interpretation.

I believe the appropriate Chinese response here is "orz."

A Dream's Worth is pretty good.