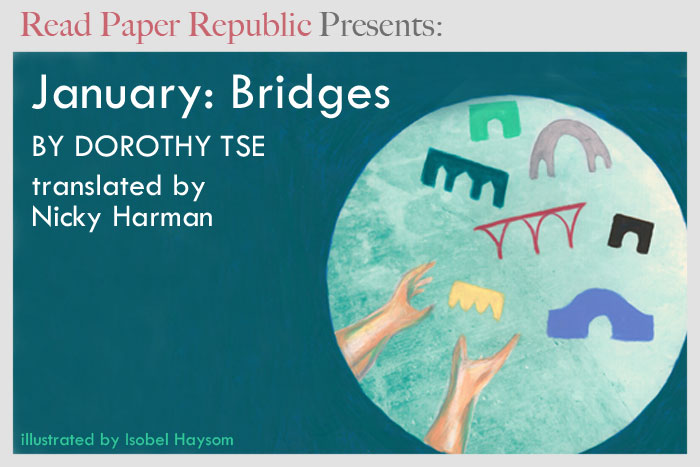 Tse has also been a featured author in the Leeds University Writing Chinese Project. Her short story "Chickens" was selected for their translation competition and she will be in Leeds on July 4th for a special event "The Story of a Story", when she (author), Nicky Harman (translator) and Dave Haysom (editor) will discuss the creation of this week's short story, and its transformation into English. This event is organised in collaboration with the Free Word Centre.

Dorothy Tse’s writing is intensely surreal – this story is the first of thirteen pieces in her collection Monthly Matters. It’s a disquieting little tale that hints at sexuality and incest, communication and separation, in language that is delicately lyrical. It appears here for the first time in English. If you like it, do read more - the pieces for March, April and May were published in Snow and Shadow, and "Chickens" (February) will be published in Structo soon.
– Nicky Harman

All illustrations by Isobel Haysom

The crimson mothers live in a crimson sea. We, island-like, still live on the city’s island. In January’s cold blast, we lean out of our windows. Quarter past three in the afternoon, and everyone in the street has a coating of frost on their lips. If they open their mouths even a little, they cannot close them.

‘Everyone has become a silent, broken bridge. A musician stands on every bridge, eyes lowered, surrounded by young female flesh, his arms and hands drawing sobbing sounds from a cello.’ That is how a reporter from the other city has described our city. I cannot hear the sounds, and try to recall the reporter’s face, but I can only remember him sitting on the train that carries him away, his eyes and nose concealed behind binoculars.

The news coverage from the other city makes my father want to bellow with rage, but he contents himself with a sneer. (He cannot dial out on any of the phones. All he hears in the receivers is the echo of his own voice.) He burns the newspaper until it is reduced to ash as fine as drizzle, then opens his enormous map. My father points to the ever-widening gap between one city and the next. Then, as other people are doing, he lies on his map and performs a ‘centipede back-spring’, his hands pressing down on the name of one city, and his feet crossing the ocean and resting on the other city. Leaning against the window, I tell my little sister that they are experimenting with ways of building bridges. Sis smiles: ‘They’re just playing a new game,’ she says. She does not appear to know that from the sinuous curves of the human body, one can divine the secret of bridge-building. While I fill a whole notebook with attempts to record human curvatures, she just picks up the binoculars and spies on the other city. I make fun of Sis because she does not understand mechanics, and even forgets the most basic arithmetic; she says that she can see the people there piling onto the ruptured bridge, and if she prods them ever so gently with her thumb, they will topple off the end.

When night falls, I badger Sis to carry out the bridge experiment with me, but she dolls herself up and comes to me carrying a lamp that lights her face and body. She looks like a duchess, her cheekbones encased in a very tall, lily-white collar. Her sleeves are shaped like paper lanterns and her mouth is blood-red. Her hair hangs loose and she lies prone on the ground, calling me, like a yapping dog, then lifts her head to look up at me. I realize there is camouflage paint all around her eyes.

When Sis calls me again, I have to throw away the dreary notebook and take off her collar. I open it like a fan, and allow her to settle it on my head. In her eyes, I see the collar has become a strange crown, and I, beneath it, a wild beast. When I smile, my canines grow sharp and spill over my lips. My sister’s neck, goose-pimpled with cold, is deathly white and very soft. She stoops and pushes herself between my legs, as if she is going under a bridge. Occasionally, her voice emerges from deep in her throat, like a distant train.

At some point, the windows disappear. Has our game begun? I am abandoned, beyond Sis’s gaze. Before dawn, one of us will catch and sink our teeth into the other, but which one? The shadows of the broken bridges intertwine beneath them, leaving no cracks visible. But immensely deep glass caverns lie concealed among them. I shout, to warn Sis that these are traps and people playing the game must take care. On July 4th 2015, an author (Dorothy Tse), a translator (Nicky Harman),and an editor (Dave Haysom) were invited by Writing Chinese (White Rose East Asia Centre, Leeds University) and Leeds Writers Circle, to discuss how a Chinese short story makes it from a very foreign language and culture into English, and to the western reader. Watch the video of the event on the blog!

Translator Nicky Harman takes us on a fascinating step-by-step visual journey, explaining how a Chinese short story makes it from a very foreign language and culture into English, and to the western reader. See Nicky's write-up (with power-point slides) on the blog!