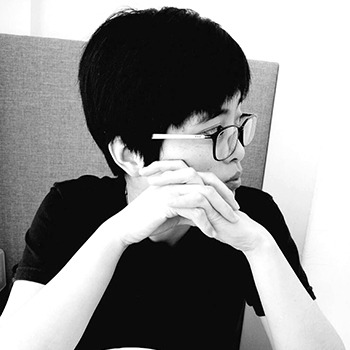 Yang Shuangzi (1984 -) is a Taiwanese novelist and researcher into popular literature and subculture. Her real name is Yang Ruoci; Yang Shuangzi is the pseudonym shared by her and her twin sister, Yang Ruohui. When they were about 5 years old, Yang Shuangzi’s parents divorced, their mother remarried, and the twins were left with their grandmother. After her death, they had to support themselves, working during the day and going to night school at night. Around 2008, the twins became fascinated by ‘lily’ or ‘girls’ love’ fiction, and Yang Shuangzi wrote her first fan fiction. In 2014, the sisters jointly wrote a Taiwanese historical ‘lily’ novel and entered it for the inaugural Taiwan Peace Foundation historical novel award, with Yang Ruoci writing the novel and her sister doing the research. A year after Yang Ruohui's death in 2016, Yang Ruoci published her first ‘lily’ novel The Man Who Caught the Moon under the pen name of Yang Shuangzi. Since then she has continued to write and publish novels and short stories set in Taiwan during the Japanese Occupation. In 2021, her novella The Season When Flowers Bloom, 花开时节, was the text set for the Leeds Centre for New Chinese Writing Bai Meigui Translation Competition. Francesca Jordan’s winning translation is here