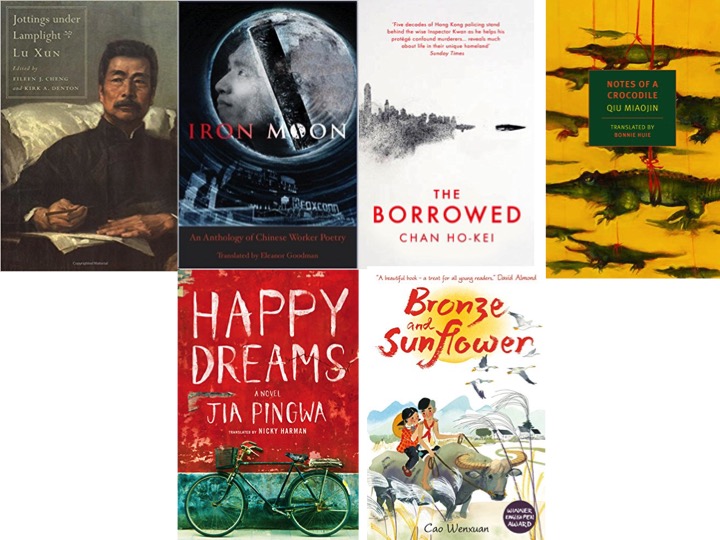 And, finally, here are some links to online publications posting free-to-view short stories translated from Chinese
(1) Read Paper Republic – after our marathon one-translation-a-week-for-a-year in 2015-16, we have continued with shorter series on themes:
- Afterlives (Nov 2016)
- Bare Branches (Nov 2017)
- Chinese month (Feb 2017) – a-blog-a-day-for-a-month – our collaboration with Global Literature in Libraries
(2) The Writing Chinese team at the University of Leeds continue with their author of the month and their annual translation competition, and have also started a new Schools Project and a new Reviewers Project
(3) The LARB has launched a new China Channel
(4) More short stories, essays and poetry translated from Chinese have been published in Asymptote, Words Without Borders and other online journals

Looks like Eleanor's translation of Natalia Chan won't actually be out until 2018...

Please leave any comments, corrections and additions here rather than on facebook etc. It's helpful to collect them all in one place - and this is the place!

The Pidgin Warrior should be under Fiction. Balastier has it tagged as YA Fiction, but it's just a regular run-of-the-mill Quixote-esque kungfu satire of nationalism and modernity in 30's Shanghai. Ya know, another one of those.

Would it be possible to add 'Cantonese Love Stories' by Dung Kai-cheung to the Fiction list?

This one got widely reviewed earlier in the year:

These two I've only seen announcements for, but haven't come across any reactions:

· Na Duo, All the Way to Death, translated by Jiang Yajun (Shanghai Press)

yes, quite interesting ! We should try and do the same type of inventory for French translations from the Chinese. it will unfortunately be much shorter, especially in the field of children literature. Note : a few of the novels and zhongpian mentioned have already been translated into French, among which both novellas by Zhang Yihe (Madame Yang et Madame Liu, tr. François Sastourné, Ming Books) + Yan Lianke : Les jours les mois les années, tr. Brigitte Guilbaud, Ph. Picquier 2009. Soon to be published : Les notes du crocodile, trad. Emmanuelle Péchenart. And maybe, Little Reunions, tr. by the same... pray to God ...

Why pray to God, when it would be more effective to direct your efforts at Chinese-invested (and controlled?) Editions Philippe Picquier?

Thanks for the corrections and additions. I've just edited the list, and incorporated them.

Found someone posting a list about translated contemporary Chinese literature.164 books in total and most book are with cover pictures. He's still updating the list I think. There are books published in the 90s too. Posting the link here in case someone might be interested.

Chad W Post and Publishers Weekly have just put their translation database online - you can search on it - and you can add your translations to it. https://admin.publishersweekly.com/pw/translation/home/index.html

How annoying to find that this list of 100+ translations neglects to mention the translator's name!

That's true! and a shame!

But for some of them if you click the book title, it will direct you to the detailed introduction page of the book, and the translators' names are included.

Bei Dao's City Gate, Open Up: A Memoir should be under non-fiction. A Chinese reader of the wechat channel pointed this out.

Thanks, Lirong. It's now under non-fiction.

such a great comprehensive list, thanks! I'll check out this author 李智良 and his poetry book 白瓷 (Porcelain, 1999), a Chinese and English bilingual volume of poetry, although this audio reading featured on Jan. issue of non-fiction 'Notes from new territories' on asymptote journal is mistakenly stated as from Japanese, which ought to be from Cantonese.

Helen, thanks for your efforts in making the list.I am afraid "Chan Ho-Kei, Borrowed, translated by Jeremy Tiang (Black Cat) " first published in the UK in 2016 by Head of Zeus, Ltd. I mean the list here means the first appearance?