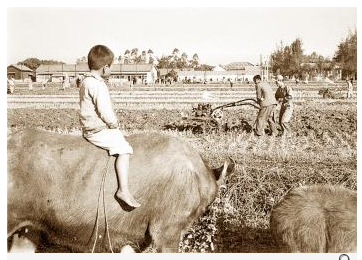 In August 1977, [Taiwan-based] writers Peng Ke (彭歌) and Yu Kuang-chung (余光中) went on the offensive against nativist literature (鄉土文學), accusing the genre’s writers of harboring communist sentiments. This turned the debate political and pushed the nativist literature war toward its high point.

Nativist literature started gaining popularity in the early 1970s and referred to a genre that sought to realistically depict the lives and sentiments of ordinary people in Taiwan, reflecting their daily struggles as well as elements of local culture and society.

Fascinating to learn that, like the CCP and Mao Zedong in Yan'an back in 1942 (Yan'an Forum on Literature and Art), Taiwan's KMT also tried to use an authoritative literary forum to spell out the politically correct mission of literary output. Here's a brief excerpt from the article in this month's Taipei Times:

After Peng and Yu’s articles were published, the KMT followed up by hosting the Second Literary Arts Summit (第二次文藝會談) on Aug. 29, 1977, with the goal of “deciding the future direction and mission of the literary arts.” Judging from the rhetoric, the aim was to put a stop to the rise of nativist literature and return to the anti-communist “combat literature” (戰鬥文學) of the 1950s.