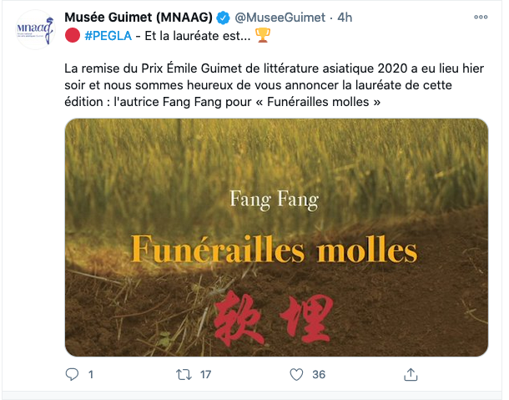 Fang Fang is now known for her diary, because it caused such a furore not long ago. Ruan mai is hardly known, and I doubt any Chinese citizen would even bat an eyelid if they ever happened to hear about that prize. Chinese literature is under dire conditions in China nowadays, we have to keep it alive and thriving on our shores.

Dear Brigitte, Congratulations to you and the author for this well-deserved prize. I notified Tsering Dondrup, the author of one of the 5 novels competing for the Guimet prize, about the awarding of the prize to Fang Fang. He replied: "She is among my favourite Chinese writers. Ruan mai is really good; I have read it. It is banned now", with a little emoji expressing distress.

Dear Françoise, all my thanks, and all the best to Tsering Dondrup ; you can tell him his novel has been praised on the night of the award ceremony by jury member Pascal Bruckner who said it was among his favourite works among the selection.