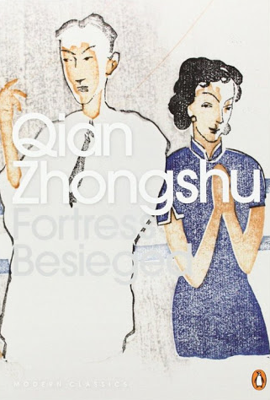 The metaphor (from the French “Le mariage est comme une forteresse assiégée; ceux qui sont dehors veulent y entrer, et ceux qui sont dedans veulent en sortir“) functions on many levels. In Qian’s satire, Fang finds disillusionment and disappointment in wartime Shanghai (full of frauds, phonies, and toadies), the relatively safe interior (where an innkeeper attempts to convince him and his traveling companions that maggots on their dinner are merely “meat sprouts”), the security of an academic career (Sanlü University proves to be a hotbed of petty intrigues), and the prestige of an international education. The image of a fortress under siege also applies to China itself: Fang and his compatriots return to Shanghai just in time to catch the Japanese invasion, and although Qian was much too subtle a writer to foreground the war and occupation – Fang leaves Shanghai to escape a broken heart, not the Japanese – they are a constant presence throughout the novel.