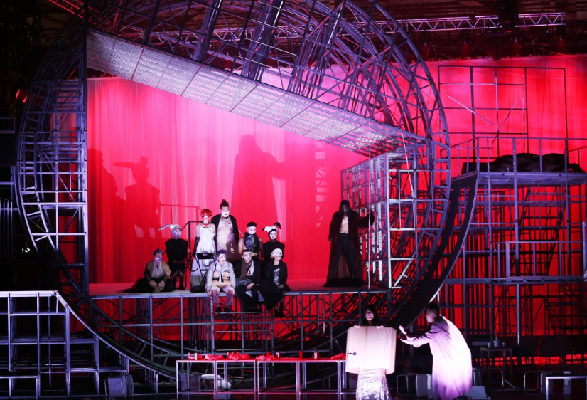 Lao She’s epic Teahouse, which recounts the tumultuous first five decades of the 20th century through three generations of a Chinese family, was one of the most hotly anticipated shows at the Avignon festival in southern France.

But the new version of the saga about social injustice, hunger and corruption took a critical bashing with French daily Le Monde comparing its “over-the-top special effects” and live Chinese rap and techno music to something that one might see in a “naff stadium rock opera”.

According to "Meng Jinghui’s Teahouse at Avignon," published at MCLC's blog, the Chinese-to-English translator of the play is:

And the Chinese-to-French translator is Pascale Wei-Guinot. http://www.chinese-shortstories.com/Traducteurs_interpretes_et_editeurs_Pascale_Wei_Guinot.htm She was in Avignon but hasn't said a word about the play. Yet.

PS but really, don't you think is would have been very disappointing - and amazing - even annoying - if the play has not caused a stir ? Given all the effort to cause one.

Sorry, I was joking. The play actually deserves much better than the blind bashing it received from the press in France. This is very unfair for Meng Jinghui who deserves more consideration and support. The audience has appreciated the play much more than the critics, some people have been moved to tears. The "stir" seems very much like The Injustice to Dou'e 《窦娥冤》.