Dad Your Name is Field-Keeper 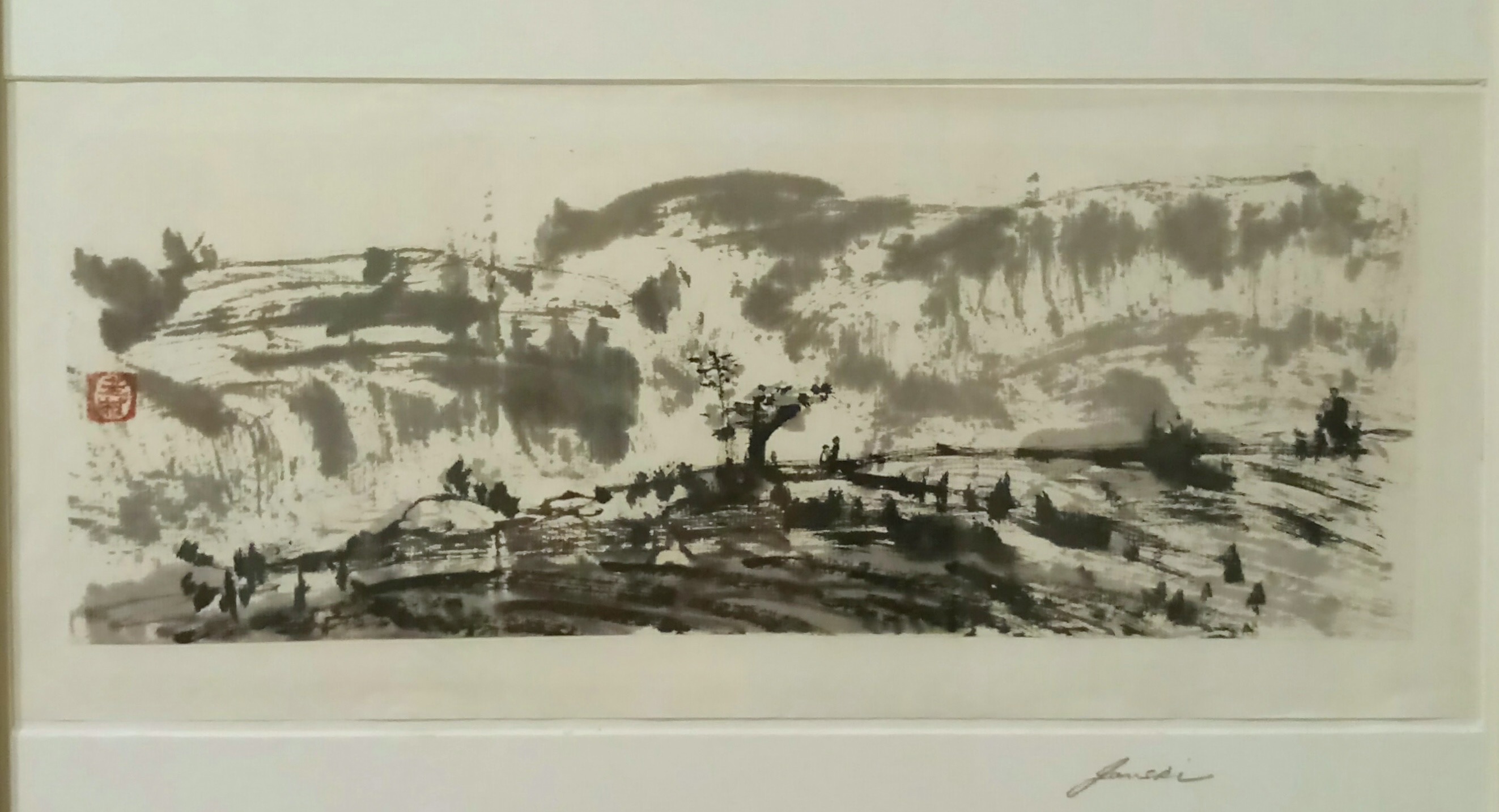 Sun Yisheng says about this story: "[It] is an assemblage of disconnected images, in a landscape that flows like an inkwash painting." Personally, I find I am often reminded of something rather different and less traditionally Chinese: his characters and their relationship to the landscape suggest the stick-like figures in an L.S. Lowry painting.

For more on Sun Yisheng's writing, see GLLI (9) - Writing (and translating) the surreal, part two: the stories of Sun Yisheng - by Nicky Harman

I was this old before I remembered my father. Before, I didn’t know his name and had no memory of him. My mother never told me. In any case, she’s dead now. As she lay dying, I sat at her bed–side, tugging on her withered hand. The moonlight fell on her face and I really wanted her to tell me about stuff that happened outside the window. But until her last breath, she just kept repeating, “I’m going to die.” And then she did, looking as if she had just fallen asleep. Anyway, it was then that I remembered my father.
“There was no warning your dad was going to leave us,” said my mother, “I don’t know what he was thinking of. The day he went, we ate dinner like normal, and he went out for a stroll, just like he always did. I sat in the cane chair sewing a pair of trousers. He was out for the usual time, then he came back in and squeezed my hand––he squeezed my hand––then he said he was going out for a knife, as if he was going out for another stroll. He didn’t come back. And he hasn’t been back since.”
“What’s my dad’s name?” I asked my mother.
“Everyone says your dad’s name was this.”
“Was what?”
“Your dad’s name was Field-Keeper.”
“Dad, your name was Field-Keeper?” I said.
“That’s right, it was Field-Keeper. And your dad went off down the road that goes past the front door.” My mother raised her hands.
All the candlelight pooled in the centre of the room. My wife sat weeping in the corner where I could hardly see her. A draught blew the drooping candle out and she got up for some matches to re–light it. The room came back into view. My wife sat back down in her corner and carried on sobbing. Her shadow flickered on the wall. My mother’s swollen legs lay on the quilt. If she hadn’t left us so soon, she’d have got up and had a go at my wife, for sure. My wife stood up, quivering, her belly supported on slender legs. She came over and wrenched the quilt off: “What’ll I do when you’ve gone?” she cried, sounding just like my mother.
“Why are you pulling the quilt off?” I asked her.
She smoothed my mother’s raised hands flat, put the quilt back and repeated: “What’ll I do when you’ve gone?”
“I’ll be back soon,” I said.
But my wife was still crying. “What’ll our son do when you’ve gone?”
Me: “I haven’t got a son.”
Wife: “You might have.”
Me: “Our son hasn’t been born yet.”
Wife: “He might be. And when he is, and his dad’s not around, what am I supposed to tell him?”
Me: “OK, this is what I’m supposed to tell him.”
Son: “Where are you going?”
Me: “To look for my dad.”
Son: “What’s your dad’s name?”
Me: “His name’s Field-Keeper.”
Son: “Dad, your name’s Field-Keeper.”
Me: “Son, your dad’s name’s not Field-Keeper. My dad’s name’s Field-Keeper.”

The boat sliced through the water and, at the next bend in the rapids, turned into the lower reaches. The roar was getting louder, and the water slapped against the side of the boat. We couldn’t stop the boat creaking and groaning. The rain was chucking it down and the gale was driving rainwater into the boat. Our clothes were soaked. He rocked the oars to steer us through, trying hard to avoid running aground or capsizing. I was being shaken to bits. Eventually the water grew quiet and you see reflections again but still the rain did not stop. I couldn’t see anything through the dense, leaden fog, just the rain-drenched rain. Our progress had slowed, and the riverbank wasn’t flashing past as fast as before.
“Has it rained where you come from?” he asked.
“The sun’s scorching there, more than it’s raining here.”
“Have you come to pray for rain?”
“That’s right. I’m excessively pious,” I said ironically. “My belly’s bursting with the water I’ve drunk.”
Even the most pious can’t resist making up stories.
“Who’s Field-Keeper to you?”
“He’s nothing to me, just like I’m nothing to you.”
They clip–clopped on past me. We were a long way from our destination and still moving slowly on. They blew dandelion seed heads and crunched puncture vines thorns under their feet. Now there were vast expanses of golden wheat on either side. They had gone quiet, and no noise came from the wasteland either. I could hear the silence. But it didn’t last long, they seemed to wake up again, only now they were making an effort to curb their excitement. Down the next hillside, they scattered into the wheat fields. As I waited for them to come back to the road, I saw sparks that quickly started a field fire. The smoke billowed up into the sky.
I stopped them. “Aren’t you hungry?”
“Are you?”
“Of course I am, what about you?”
“We are too.”
“So why are you burning the wheat?”
“Don’t you want to find Ferry?” they said. “It’s going to rain soon, and the girl’s getting married, understand?”
I got to the river but didn’t find Ferry and the river was in spate. A gust of wind had blown the boat here. The sound of sculling had lost the restraint it should have had.
“OK, can you tell me where Ferry is?” I asked.
“I’ve never heard of him so I can’t tell you,” he said.
“Someone told me that I should come and find Ferry.”
“Did you come alone?”
“No. There were a lot of people but they were walking too quickly and they left me behind. I wanted to keep up with them but when I got here, I realized there was only me left.”
“Who are they?”
“They’re the crowds I was talking about.”
“Was it raining where you came from?”
“The sun’s scorching there, more than it’s raining here.”
“What have you come for?”
“To find Field-Keeper.”
“Who’s Field-Keeper to you?
“He’s no one to me, just like I’m no one to you. Do you know someone called Field-Keeper? I’m looking for him.”
“Maybe he passed by here, or maybe not, I don’t remember. You can go on along the river and keep looking. But there’s a village up ahead, you should take a detour.”
“Why should I take a detour?”
“Because there’s a village up ahead.”
“Can’t I go through the village?”
“You can, if you want to.”
“Huh,” I said. “What’s your name?”
“Ferry.”
“Your name is Ferry?”
“No. Ferry’s not a person’s name.”
“Ferry must be the name of the pierhead,” I said.
“No,” he said. “Ferry’s the name of the river. You see this water? The place it’s just gone past is called Ferry. The place it’s coming to is called Ferry, and where we are now is called Ferry. Everywhere on this river’s called Ferry.”

“I never saw the village,” the mule-driver said and flicked his whip at the beast. The cart shuddered but went no faster.
“I said, the snow buried the village,” I said.
“But I didn’t see any snow.”
“It’s like you said, it’s melted.”
“The snow melted but not the village.”
“Right, the village didn’t.”
“But I never saw the village,” he said.
“You saw me?” I asked.
“Yup, I must have done, otherwise I couldn’t have hoisted you onto the cart.”
“Right,” I said. “But it didn’t happen in the village.”
He shut up then and didn’t argue with me anymore, just sat there motionless facing forwards, his shoulders hunched over. I gave him a sideways glance. He looked tranquil. The road ahead began to widen and level out but the mule cart creaked louder than ever and slowed, and the afternoon creaked along and got slower too.
“Hey!” He shouted at the mule, and wacked it again. The cart shuddered more violently than ever. Then he said: “My name’s Field-Keeper.”
The road was pot-holed, the crows were flocking back and darkness began to steal over us.

If you see him walking across this endless plain, he’ll be breathing deeply as he walks into the dense mist, into the boundless night.

I really would like to read the Chinese original of this story but can't find it anywhere online. Could you mail it to me? Thanks a lot. Justin