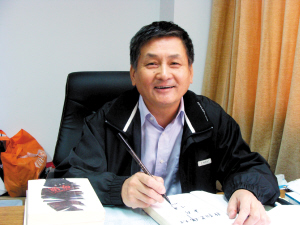 Ye Xin was born in Shanghai in October 1949. He has been a prolific writer since the publication of his first work "High Sierra in Miaoling" in 1977, producing more than 90 published works over the last thirty years. His signature works include the novel "Wasted Years" (first printing in 1980), "The Private Tutor," "Retribution" (first printing in 1991), "A Terrible Cyclone," and "In a Few Years." Ye Xin is highly representative of the generation of young writers that emerged from the Cultural Revolution and were deeply affected by it, and a well-known writer enjoying wide popularity in China. Since embarking on his writing career, he has been an active contributor to contemporary literature in China. TV drama series adapted by him from his "Wasted Years," "The Private Tutor" and "Retribution" have been a sensation among viewers across the nation, making him a household name. He has received three national awards for excellence in the genre of the TV drama series. He is currently vice-chairman of the Writers' Association of China, the Writers' Association of Shanghai, and the Shanghai Federation of Literary and Art Circles, a member of the Shanghai Municipal People's Congress and the director of the Institute of Literature of the Shanghai Academy of Social Sciences. (info from publisher)