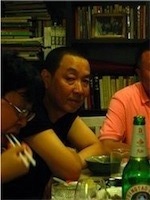 One of the iconic writers of the 1980s, Xu Xing's Variations Without a Theme (无主题变奏 ) defined the mood of those lost, idealistic days for a lot of Chinese youth. His fierce irony and readiness to champion the downtrodden are rare, almost unfashionable traits these days – despite his puckish humor, he is one of the few public figures in China still capable of real outrage. His You Can Have Whatever's Left (剩下都属于你) has been translated into German and French.