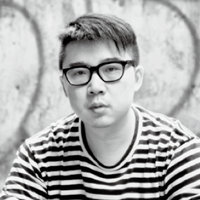 Born in Hubei in 1975, Li Xiuwen spent time living in Tokyo in his youth, and has cited the influence Japanese authors such as Ueda Akinari and Junichiro Tanizaki have had on his work. After working as a reporter for several years, he published his first short story collection – of which ‘The Heart, Too, Broken’ was the title story – at the age of twenty-five. His novels include Tearmark (2002) and Bundled Up to Heaven (2003), and more recently he has been writing for television shows such as Tenth Division of the Red Army.