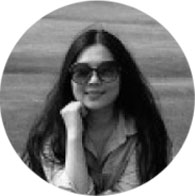 Born in 1980 in Shandong province, Cai Dong is an author and critic whose work has been published in literary magazines including People’s Literature, Dangdai, and Mountain Flower. A collection of her stories, The Ballad of Mulan, was published in 2013 and won the People’s Literature Rou Shi prize. She currently teaches at Shenzhen Polytechnic. Cai Dong’s short story “The Holiday Monk Returns” appeared in the Summer 2014 issue of Pathlight.