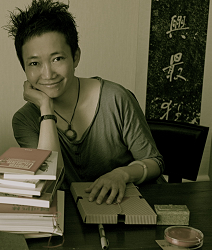 Though born in Luoyang in 1964 and registered in Shandong, Yu “Emily” Xiaodan grew up in Beijing, where she attended a special foreign languages boarding school before attending Beijing Foreign Studies University. After graduation she joined the Chinese Academy of Social Sciences, where she earned a master’s degree and worked as an editor at the Foreign Literature Review, translating Vladimir Nabokov’s Lolita and Raymond Carver’s short stories into Chinese. Inspired by the shifting attitudes of Chinese society in the 1990s, she moved to New York City in 1996 to study at the Fashion Institute of Technology, subsequently working as a lingerie designer. She has published a collection of essays in Chinese about her experiences in the fashion industry called Beauty Within: Notebook of a Lingerie Designer in New York (Yilin Press, 2011). Her first novel, 80s Lovers (People’s Literature Publishing House, 2009), tells the story of Beijing university students trying to find their way amid love and loss in the passionate 1980s.