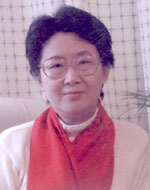 Wang Xiaoyu (b. 1944) graduated from the Chinese Department of East China Normal University in 1966. She is currently a professor and supervisor of doctoral candidates at East China Normal University's School of Communication. Her writing career as a novelist and a TV dramatist began in the late 1980s. Her major works include the full-length novels The Wisteria Garden, Saijinhua of the Mortal World and 99 Roses, as well as the novellas Shanghai Women, Professor Tian's 28 Housemaids and Tenants, His One and Only, Black Magic, and Shuiqing and Her Men. Many of her writings have been adapted for TV by herself as well as other writers and have been well received by the public. She won the National Literature Award for Women in 1998 and again in 2004. (info from publisher)