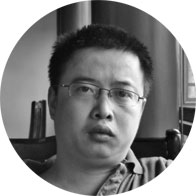 Tian Er was born in 1976 in Fenghuang, western Hunan province. Since beginning his writing career in 1999, his short stories have won the 18th and 20th Unitas Fiction Award for New Writers, and a novella One Decorated Man won both the Lu Xun Prize and the People’s Literature Prize. His first novel, Celestial Bodies in Suspension, was serialized in 2013.