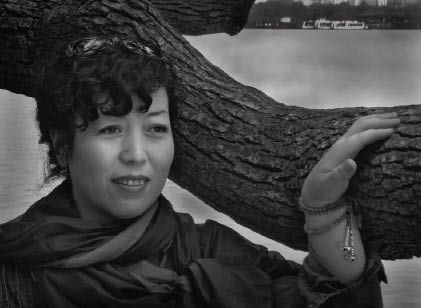 Medrol is Tibetan and was born in Qinghai in 1966. She is a member of the Chinese Writers’ Association committee, chair of Qinghai Writers’ Association and editor of the literary monthly Qinghai Lake. She was first published in 1987, writes mainly about Tibetan life and culture, and has a particular interest in traditional Tibetan women and contemporary Tibetan female intellectuals. She has won the 5th National Minority Literature Junma Prize, the 10th Zhuang Chongwen Prize, the Chinese Writer’s Baili Fiction Prize, the 1st Qinghai Young Literature Prize, and the 4th and 5th Qinghai Government Literature Prize for Excellence. Her works include the novels Sun Tribe and Moon Camp, and the collections of essays and novels Selected Works of Medrol and Auspicious Yushu.