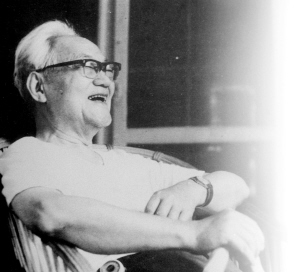 Ba Jin, pseudonym of Li Yaotang (李尧棠), was one of most important and well-respected writers of the twentieth century in China. He was born in Chengdu, Sichuan in 1904, but lived in Shanghai for most of his adult life before his death in 2005. Ba Jin was prolific, publishing 14 short story collections, 19 novels, and reams of non-fiction works, memoirs, and letters. His most critically acclaimed fiction was written during the 1930s and 1940s, but his influence extended into the 1980s. During the Cultural Revolution he suffered some criticism, but was officially rehabilitated in 1977, and appointed Chairman of the Chinese Writer’s Association in 1983.

As a young student in Chengdu, Ba Jin was deeply affected by Piotr Kropotkin's pamphlet ‘An Appeal to the Young’ and began campaigning for anarchist groups. He is supposed to have met with activists Emma Goldman and Alexander Berkman while living in France in 1927-8. After his return to Shanghai in 1928 he started editing for publishing houses and magazines, and writing his own works. His two famous trilogies were written in the decades that followed. The‘Torrent’ trilogy《激流三部曲》includes his most celebrated novel, ‘Family’《家》(1931), and was later completed with ‘Spring’《春》(1938) and ‘Autumn’《秋》(1940). His ‘Love’Trilogy 《爱情三部曲》is comprised of ‘Fog’《雾》(1931), ‘Lightning’《电》(1931), and ‘Rain’《雨》(1933). Other important works include ‘A Garden of Repose’《憩园》(1944), ‘Ward No. 4’《第四病室》(1946), and ‘Cold Nights’《寒夜》(1947). Ba Jin received the Fukuoka Asian Culture Prize in 1990.

His most important nonfiction pieces can be found in ‘Random Thoughts’《随想录》(1978-86), a five volume collection of which a partial translation appeared in 1984 by Germie Barmé. Barmé and Ba Jin were in regular contact during this period, and both wrote for the same Hong Kong magazine, ‘The Nineties Monthly’. This volume contains some frank admissions about the author’s involvement in the Cultural Revolution, but Barmé has subsequently been very critical of Ba Jin’s ‘silence’ during the 1980s and 1990s (depite the fact that Ba Jin wrote a letter of support to the students of the 1989 Tiananmen protests on May 18). For Barmé’s comments see: http://www.danwei.org/breaking_news/barme_on_ba_jin.php

Link to obituary in the Guardian October 18 2005: http://www.guardian.co.uk/news/2005/oct/18/guardianobituaries.china