Moment of Epiphany: What if Harold Bloom had been born in Shandong? 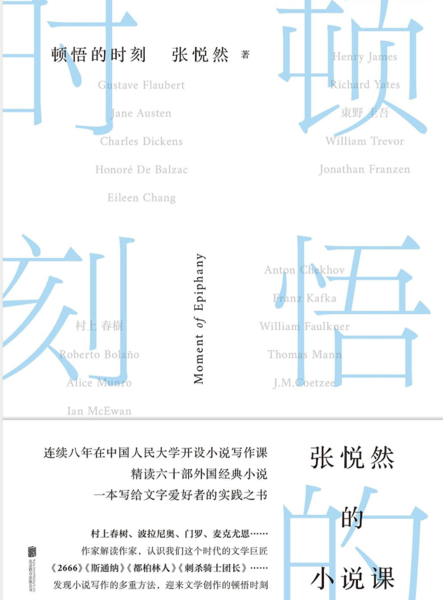 The number of university creative writing programs in the United States has skyrocketed over the past four decades.

The MFA program and its influence irrevocably changed American literature.

The MFA program graduate came to dominate American (and to a lesser extent Canadian and UK literature), while most writers in China learned their trade the honest way, by reading theory and literature, then by turning out copy, and editing at whatever post they were assigned.

The Department of Chinese at Fudan set up a creative writing master's program in 2006, and Suzhou University, Zhejiang University and Peking University all run programs currently.

These programs were created under the influence of the American MFA model (not, for example, the China Writers Association’s Lu Xun Literary Institute 鲁迅文学院), and have all had varying degrees of success.

Renmin University’s creative writing program has gotten the most attention, though.

Signing up Yan Lianke 阎连科 as a professor was a savvy move, whatever you think of his recent output. Zhang Yueran 张悦然, a star in her own right, was added to the roster soon after.

Zhang Yueran came to fame in her twenties, representing the more serious side of post-1980s generation literature.

When I saw her in conversation with her Dutch translator Annelous Stiggelbout at the Beijing Book Fair last year, I was impressed by her attention to the craft of writing.

Now, all of us have the chance. Her latest book, Moment of Epiphany 顿悟的时刻 (released last month by Motie Books 磨铁图书) promises that it’s more than simply a book about literature but Zhang Yueran's "literature course" 小说课.

Browsing through Douban, all of the same books that an American MFA student would be reading are available in translation, but there are fewer books on creative writing by Chinese authors. (That means, despite everything I am about to say, this seems like an interesting project.)

“A writer deciphering writers,” the cover copy goes on, “introducing us to the literary titans of our age.”

A woman in her 30s writing a book focused on a male-dominated Western canon might be provocative elsewhere (I’m thinking, off the top of my head, about Zadie Smith getting the occasional call-out for David Foster Wallace and Western canon worship)—for a Chinese author, it’s not a sign of anything in particular.

A version of the certain Western canon is deeply important to modern Chinese literature. It does stop somewhere around 1964 ([that’s generally what gets covered here, but as Joel Martinsen points out below, it’s not as if she addresses no literature from after that year, as we can see by this list of works cited: 阅读清单：《顿悟的时刻》中提到的那些书).

There are various reasons for that. One of the most obvious ones is that nobody was reading or translating much contemporary Western fiction after roughly 1964.

The Chinese writers that came of age in the 1980s were still soaking up Stendhal and Dostoevsky and Stendhal and Akutagawa, slowly working their way through Saul Bellow and Gabriel García Márquez...

But a few excerpts from the book have been published, so we can get beyond the cover.

“Emotional Fulcrum” 情感的支点 starts with two Emmas, one by Flaubert and another by Austen, and the idea of an emotional pivot point in a novel, which allows the reader inside. (Interestingly, she grants Eileen Chang 张爱玲 entry into the literary titan category.)

Another excerpt, “The Process of creation is a Battle Between Good and Evil” 创作的过程就是天使人格与魔鬼人格的搏斗, opens with Brothers Karamazov and the Bible, then gets into Richard Yates and John Williams.

I swear, when all of the West’s libraries have been burned out and her universities are only teaching social media management courses, there will still be Chinese writers and academics huddled around the Western canon as it stood in 1964. I suspect the majority of people under 45 that can hold forth on George Eliot and William Thackeray are products of Chinese universities.

Maybe it’s my guilty conscience: I should know Charlotte Brontë and mid-’60s campus novels far better than I do!

It is probably also my investment in Chinese and world literature—why isn't Shen Congwen a literary titan? What about Jia Pingwa? What about Pai Hsien-yung (product of an American creative writing program, by the way)? What about Chu T'ien-wen?

I cringe after writing that—sounding like it's lecturing a Chinese writer on their own nation's literature—but I'll leave it in, because I am trying to get to a point here...

One of many problems with the reception of Chinese literature in the West is that it is usually being filtered through Sinologists. They are the ones that translate these books. They see Chinese fiction as Chinese fiction (and they often see writing from after 1949 as simply the degraded classical tradition, rather than as something vibrant and rich), rather than as a member of the family of global literature.

I've said before that the best way to understand contemporary Chinese novels is through a version of the Western canon that most of us would consider outdated—and, listen, I don’t mean that in a condescending way either: I’m saying things are more complicated once you connect “Chinese literature” out to global literature. Chinese writers in interviews usually reference Dickens and Tolstoy and Carver more often than they reference their peers. (This is somewhat complicated. I suppose they get exposed to those great works as models, and they’ve read a lot of criticism about them, and understand more clearly how they work, so, as well as being influenced by them, they’re more easily used as shorthand.)

The odds of Zhang Yueran’s book being translated into English are slim, but, even if I personally find the content kind of dull, it provides great insight for the Western reader into how Chinese writers see the work they are creating.

But Chinese writers also all seem to love Ian McEwan ... And Yan Lianke is not a fan of 19th century realism, so that might influence his students too, I guess?

Haven't read the book, but from the TOC on Douban and the full list of titles, there seems to be a bit more variety than what's on the cover or in the press, including Claire Keegan, Annie Proulx, David Mitchell, and Yiyun Li. The close reading texts in the second half are Haruki Murakami, Roberto Bolaño, Alice Munro (twice), Ian McEwan, and Jennifer Egan.

The extra context from the TOC and lists are good.

I have a copy coming soon, so I can find out how I wrong I was / it looks more interesting than the excerpts suggest.

How much of this isolation is due to the CCP-imposed media/internet isolation of the Chinese people? If Chinese netizens were free to socialize with their peers around the world, would they not be better able to popularize and canonize Chinese literature?

How much of this isolation is due to the CCP-imposed media/internet isolation of the Chinese people?

Not much or probably not at all, I think.

Like, Zhang Yueran hasn't not read Western literature of the past several decades. She even discusses a bunch in the book. She's not an outlier, either.

The 19th/20th century realist canon dominating is down to... I don't know. I guess part of it was enshrining realism (and socialist realism), and relative (but nowhere near total) cultural isolation for a couple decades, and a somewhat conservative atmosphere in the literary and academic worlds?

I made a big deal out of this, but I think part of why she uses examples like Dostoevsky and Dickens is simply because everyone has read them, and they're brilliant, too.

My impression is that Chinese writers generally read much more Western literature than Western writers read Asian (Is that the correct way of saying it? Well, you understand what I mean). It gets translated.

It's funny, because in my experience the authors that Chinese writers can't stop talking about aren't the realists at all, but the inescapable canon of Kafka, Borges, Calvino, Kundera… authors of short books packed with imagination, highly allegorical, easily to digest, easy to imitate.

Historically, I think the books that Chinese writers are still citing are the ones that they read in the 1980s, after the cultural famine of the Cultural Revolution. Those books were foundational to their literary re-education, and usually very well translated, to boot.

Zhang Yueran is more widely-read than most. I don't think the majority of Chinese writers are paying much attention to the English-language literature of the past thirty or forty years.

Let us begin with the factory’s air. This air is not only the yeast fermented …

Let us begin with the factory’s air. This air is not only the yeast fermented …

To behold everything, let’s begin by talking about the air in the industrial area. It …

-I’ll get around to telling you everything, but first let me tell you about the …